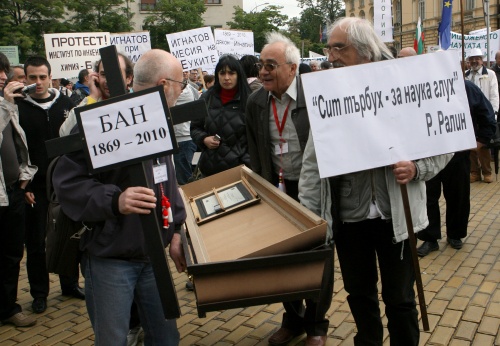 BAS scholars started their historic rally by placing a coffin, symbolizing the death of the Academy, in front of the National Assembly in Sofia. Photo by BGNES

Thousands of Bulgarians gathered on Wednesday in front of the National Assembly in Sofia, to protest against the government's plans to reform the Academy of Science.

Bulgaria's Education Minister announced recently the Cabinet's plans to restructure the Bulgarian Academy of Science (BAS) by closing down its main administration, reducing the number of its institutes and turning them into financially independent units.

“This is an absurd and ridiculous idea,” rallied Wednesday Petko Petkov, a professor at the Sofia Technical University and a supporter of the protest. “BAS central administration is responsible for the Academy's international activities, the patents, the archives, the library. 70 people work there – what will the state benefit from firing them.”

Bulgarian writer and BAS scholar Anton Donchev urged the Bulgarian public to not let “the dignity of BAS be trampled upon”, saying that the Academy is “like a magnificent 140-year-old tree whose roots could lift up the pavement beneath the Vasil Levski monument, it is Bulgaria's center for culture and science.”

The Bulgarian scholars who set history Wednesday by staging the first ever BAS public rally in 140 years, read out a declaration to the crowds, which was later handed to the Bulgarian Prime Minister Boyko Borisov by representatives of the Academy.

Protesters also staged a make-belief burial of the Academy by mummifying a young woman and then making her ressurect the way 'Bulgarian science will rise from the dead because it is strong.'

At the beginning of May, Minister Ignatov announced that BAS will be restructured, its main administration will be shut down and the number of its institutes will be brought down from 69 to 40.

Also, the real estate property of the Academy is being currently inspected. Results so far have revealed that 7 of the sites said to be owned by BAS are in fact state property and that the Academy has been renting out some of its premises without first announcing a tender as is required by the State Property Act.

The inspection which was assigned by Sofia's Regional Governor Danail Kirilov is expected to be brought to a close at the end of May.