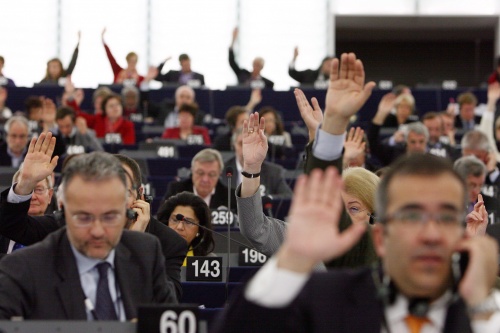 The EP is voting to increase funding for EU Member States for accepting refugees in order to encourage more of them to help in resettlement. Photo by BGNES

EU Member States volunteering to receive refugees sheltered by third countries should receive up to EUR 6000 from the EU refugee fund per person resettled.

The proposal was made by the European Parliament's Civil Liberties Committee in April and will be voted Tuesday.

The EU countries contribute to resettlement far less than other developed countries like the US, Australia and Canada, the Members of the EP point put. They also call for internal EU solidarity with Member States facing special pressures.

The move is now put on the table because data shows the EU contributed to only 6.7% of the global resettlement of refugees in 2008, with 4378 individuals. The UNHCR estimates that 747000 are in need of resettlement. As of today, only 10 Member States have taken part in any resettlement schemes.

MEPs also ask that the new EU long-term budget (2013-2017) should include specific funding for resettlement and provide financial support for a more ambitious resettlement program.

The European Asylum support Office will establish criteria for quality resettlement in cooperation with UNHCR, NGOs and local authorities. The nationalities and categories of refugees that should be prioritized will be regularly updated. The Commission will establish the common EU annual priorities for resettlement by way of delegated acts. MEPs should participate in the process, and be entitled to revoke the delegation of power to the Commission or to object to a delegated act within one month.

The EU resettling priorities include: children and women at risk of violence or exploitation, unaccompanied minors, person with serious medical needs, survivors of violence and torture and people threatened with forced return or victims of natural disasters

Parliament will also vote on the creation of a European Asylum Support Office where Jean Lambert (Greens/EFA, UK), is the reporter. Based in Valletta (Malta) the office will lend its expertise to Member States receiving asylum seekers. It will strive to strengthen co-operation among national authorities, and afford administrative support to Member States subject to particular pressure. Parliament and the Council agreed at the second reading to assign the office the task of co-ordinating information exchange on resettlement actions carried out by Member States.

The decision establishing the European Refugee Fund will be amended to ensure that it is adequately funded - MEPs will vote on a report by Claude Moraes (S&D, UK), to this end.