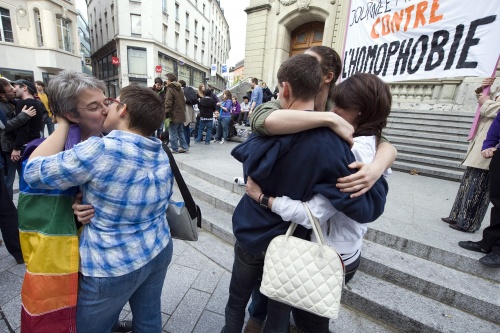 People stage a 'kiss in' demonstration to mark the International Day Against Homophobia, in Lausanne, Switzerland, Monday, May 17, 2010.

Bulgaria is one of the most homophobic countries in the EU, according to the Bulgarian gay and lesbian community.

As a member of the EU, the Bulgarian state should assist those of its citizens who have a different sexual orientation, however it does nothing to alleviate their situation, said Monday Aksiniya Gencheva, a Bulgarian gay activist.

Gencheva cited data by Eurobarometer which shows that 30% of the Bulgarian employers have declared that they would not hire a gay or lesbian person although the country's Labor Code defends the rights of gays and lesbians.

Also, according to Gencheva, two foreign residents have asked for political refuge in Bulgaria on homophobic grounds but have been turned down.

17 May is declared the International Day against Homophobia and is marked throughout the world.

“Homophobia is an outrageous violation of human rights,” said Monday the President of the EU Parliament Jerzy Buzek.

The Spanish Green MEP Raül Romeva suggested that anti-discrimination campaigns and discussions be launched within the EU.

“The EU anti-discrimination directive sends a message not only to EU member states but also to non EU countries about the need for a change in attitude,” Said Romeva Monday, adding that the rights of gays, lesbians, bisexuals and transsexuals are most neglected in countries where there is no clear boundary between the state and religious institutions, including the Near East, the Caribbean Islands and Africa.

Romeva was quick to point out that the residents of many European states are also forced to “live in the secret – hiding facts about their sexual orientation” and that many of them have been deprived of their human rights.

It is celebrated in more than 50 countries in the world, and recognized officially by the European Union, Belgium, United Kingdom, France, Luxembourg, Netherlands, Mexico, Costa-Rica, etc.