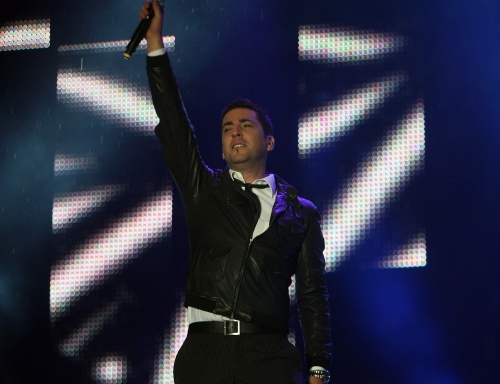 The Balkan Music Awards are organized by the Bulgarian-owned Balkanika Music Television, a cable and satellite television showing music from all Balkan states.

The award ceremony was actually a concert open to the public which took place on the Alexander Batenberg Square in downtown Sofia, which attracted thousands of spectators despite the pouring rain.

Serbian performer Jelko Yoksimovich received the 2009 Best Song of the Balkans award for his song Ljubavi. He also won the prize for Balkan Singer of the Year.

The songs which competed for the support of the viewers in 11 Balkan countries through SMS Text Messages and phone calls included Play Back by Flori (Albania); Med by Dino Merlin and Emina Yahovich (Bosnia and Herzegovina); You Know Nothing by Emanuela and Krum (Bulgaria); Lazu Oci Moje by Colonia (Croatia); Spase to Hrono by Sakis Ruvas (Greece); Kraj by Karolina ft. Sky Wikluh (Macedonia); Suzama Kupices Me by Nenad Cheranich (Montenegro); That’s My Name by Akcent (Romania); S Tabo by Tanya Jagar (Slovenia); Ljubavi by Jelko Yoksimovich (Serbia); Fast Life by Hadise (Turkey).

The songs of Albania, Romania, and Bulgaria came in second, third, and fourth, respectively.

The Best Balkan Music Videoclip Award went to Greek star Anna Vissi for her song Stin Pira, who also carried the award for “Overall Contribution to the Development of Balkan Music.

Romania’s Akcent grabbed the prize for Best Balkan Group/Duet of the year. Hadise from Turkey won the award in the category for Best Female Actress of the Balkans.

Bulgarian Eurovision participant Miro performed for the spectators the song "Angel" with which he will be running in the 2010 European song contest.