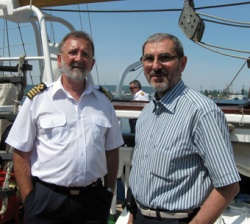 MV Panega, the Bulgarian chemical tanker hijacked last week by Simali pirates in the Gulf of Aden, has reached the coast of Somali.

This has been announced Monday by Capt. Hristo Donev, the CEO of the ship operator – Navigation Maritime Bulgare.

Capt. Donev said that the Somali pirates had not attempted to get in touch with the management of the company yet, and that none of the 15 Bulgarian sailors on board of the hijacked vessel had contacted his family.

The MV Panega (built 1986, 5,848 dwt) is a single-skin hulled product tanker operated by Navigation Maritime Bulgare Ltd (NAVIBULGAR), Bulgaria, which was privatized in 2008. It was traveling empty to bring scrap from India as part of a EU Navfor-guarded convoy when it was hijacked on May 11.

MV Panega is the first ship sailing under Bulgarian flag to be hijacked by Somali pirates.