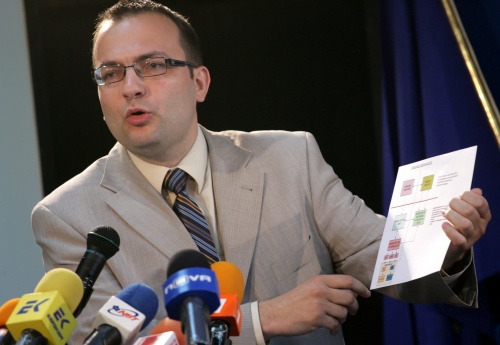 "The people, who try to convince Prime Minister Boyko Borisov that Bulgaria has the best fiscal performance in Europe do not know what they are talking about. I can even say this talk is dangerous,” Martin Dimitrov, UDF leader, claims. Photo by BGNES

Bulgaria's center-right government, which swept to power in July last year, has been harshly criticized by one of its allies over a “failure” to tackle the crisis.

“The cabinet anti-crisis measures are not adequate and the problems that the crisis poses remain unresolved,” Martin Dimitrov, leader of the right-wing UDF, which is widely considered to be an ally of the ruling party, told the national radio on Sunday morning.

“We are dealing with an economic crisis, but should the bad become worse, it may easily turn into a financial crisis,” he added.

Dimitrov repeated earlier calls for getting IMF bailout aid, which both the government and the opposition has strongly rejected, saying that would send a wrong message to investors.

“I do not want to see the International Monetary Fund in Bulgaria, but the prospect looms large. The lender can be kept away only if appropriate measures are implemented.”

The right-winger pointed out that the biggest problem is the budget deficit, which his party forecast to swell to 5% of the GDP, or over BGN 3 B, by the end of the year. The government however claims it will be able to bring it down to below 3% from 3.9% in 2009.

“The government has no clear concept about what it is doing. The people, who try to convince Prime Minister Boyko Borisov that Bulgaria has the best fiscal performance in Europe do not know what they are talking about. I can even say this talk is dangerous,” Dimitrov added.

Asked whether the right-wing MPs will support the revised 2010 budget, Dimitrov said “it will depend on what is in this document.”

Reports surfaced earlier this week, saying that Bulgaria’s government has approved a revised 2010 budget law that taps into the fiscal reserve as it battles recession and seeks for ways to fill in gaps. According to Sega daily the fiscal reserve will slump from BGN 6.4 B to BGN 4.5 B at the end of the year.

The government announced earlier in April plans to cut spending on state administration by 20% and issue debt to fund infrastructure projects and increase benefit payments.

The cabinet proposed that parliament revise the budget to include increased spending, but has never even mentioned a cut in the fiscal reserve, which under local legislation should not fall under BGN 6.3 B.

The cabinet has already announced one package of austerity measures, which include the introduction of a luxury tax, the sale of minority stakes in state-owned companies and a bond issue.

Bulgaria operates in a currency board regime, under which the lev is pegged to the euro, and is obliged to keep a fiscal reserve. At the end of March it stood at BGN 6.3 B, flat month-on-month, and down from BGN 7.95 B in the same period a year ago, data showed.

Bulgaria passed a 2010 budget planning for a 0.7% deficit, but was forced to revise that target to 2.4% at the start of the year.

Bulgaria’s budget deficit will reach 2.8% of gross domestic product (GDP) this year, after 3.9% in 2009, according to a European Commission forecast.

The government forecasts economic growth of 1% this year after a 5.1% contraction in 2009.