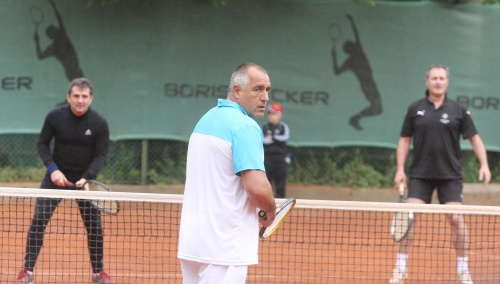 Upon returning from his visit to the city of Pleven, Bulgaria’s PM, Boyko Borisov (center) won a game of tennis against businessman Nikolay Gigov and journalist Sasho Yovkov as part of the amateur tournament “The Cup of the Group. Photo by BGNES

Bulgaria’s Prime Minister, Boyko Borisov, blamed the media Saturday for allowing the BGN 8 B in budget deficit in 2009 by not asking the “guilty” any questions.

“You now ask me every day. You did not ask then. This is first your fault, then the fault of Finance Minister, Simeon Djankov, and then mine,” Borisov is quoted saying. His words came on the heels of his speech at the Parliament Friday stating Deputy PM Djankov had made a mistake in his rushed forecast about Bulgaria’s joining of the Eurozone.

The PM further accused the Socialist President and Commander in Chief, Georgi Parvanov, for keeping silent about the notorious deal with the purchase of the Cougar helicopters by the Defense Ministry, saying Parvanov also does not miss a day without criticizing the cabinet, but did not utter a word about the dealings of the previous socialist-led cabinet.

“If he had said something at the time we would not have to pay these BGN 300 M now,” Borisov pointed out, explaining that Bulgaria is trying to annul at least part of the deal, but the terms are such that the country can lose all money paid so far, which is the major part of the total amount.

On the topic of the theater reform, the PM informed theaters will not be closed but restructured with little theaters merging with bigger, regional ones and their funding based on performance and the tickets sold.

Borisov spoke during his Saturday visit to the northern city of Pleven, where he inaugurated the new building of the regional library.