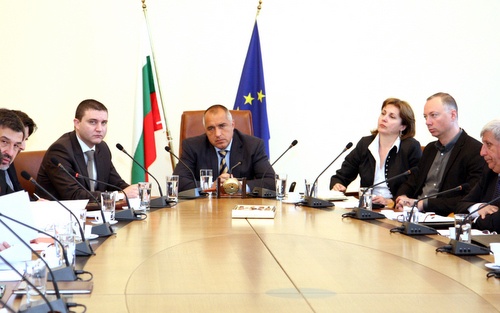 The National Security Council of the Bulgarian Cabinet met on Friday to consider the draft national security strategy. Photo by BGNES

Bulgaria’s Defense Minister has proposed the merging of intelligence services to create a mega-structure of the CIA type.

Minister Anyu Angelov announced Friday in Parliament he insisted on the creation of a new structure uniting the military and the foreign intelligence.

Currently, Bulgaria’s military intelligence is controled by the Defense Ministry, while the National Intelligence Service is answerable to the President.

According to Angelov, the new Bulgarian CIA will be created in a similar fashion to the State National Security Agency DANS, which is dubbed “the Bulgarian FBI”; DANS was set up in 2008 by merging three internal security and counter-intelligence institutions.

Similarly to DANS, the new foreign intelligence structure will be under the control of the Cabinet rather than the President – an issue which has led to sparks between President Parvanov and the Borisov government.

The Bulgarian CIA might be created within 2 years in accordance with the country’s new draft National Security Strategy was considered Friday during a meeting of the Security Council of the government.

Angelov has pointed out that upon giving up the control over the military intelligence, the Defense Ministry will preserve a unit for army reconnaissance in order to provide for the security of the Bulgarian troops stationed abroad; this unit is not going to provide intelligence information for the military and political situation abroad, which will be the job of the future CIA.

The Defense Minister explained that the future National Security Act will define the powers of the respective intelligence institutions. He insisted that the government’s National Security Council has to become a permanent “emergency situations” body because at present the Bulgarian authorities reacted to issues by setting up individual crisis headquarters only after an issue has already emerged.

“We also need a center for strategic analysis at the National Security Council, which be preparing forecasts for actions. This unit will be using foreign experts from the EU, NATO, and international NGOs and will have a small secretariat,” explained Angelov.

Bulgaria’s Security Council will have a second meeting regarding the draft National Security Strategy at the end of May; the strategy will be considered by the government in June, and will then be tabled to the Parliament for adoption.

“The merging of intelligence and counter-intelligence services is counter-productive,” said the Defense Minister when asked if DANS will be merged with the new mega-structure.

“I’ve heard all opinions presented during the meeting. There are constructive suggestions that we will include in the final draft of the National Security Strategy,” stated Bulgarian Prime Minister Boyko Borisov after Friday’s Security Council meeting.

Bulgaria’s only similar document ever adopted – the National Security Concept – was crafted by the Ivan Kostov government in 1998.

The Stanishev Cabinet also had a national security strategy draft prepared – by expert Dimitar Yonchev – but the document was never submitted to the Parliament for approval.