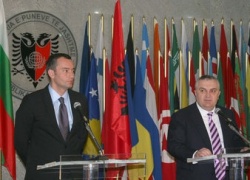 Bulgarian Foreign Minister Nikolay Mladenov (left) with his Albanian counterpart Ilir Meta (right) at the end of his week-long tour of the Western Balkans. Photo by Foreign Ministry

Bulgarian-Albanian Chamber of Commerce has been set up in Tirana during the visit of Foreign Minister Nikolay Mladenov.

The Bulgarian-Albanian Chamber of Commerce was opened by Mladenov Thursday night. Its founding is the first Bulgarian initiative of its kind in the Western Balkans.

“Bulgaria is going to support the EU visa liberalization for Albania after the European Commission initiates such a measure,” stated the Bulgarian Foreing Minister during his meeting wih his Albanian counterpart Ilir Meta on Friday.

Albania was the last stop of the Western Balkans tour of Nikolay Mladenov which included Macedonia, Serbia, Kosovo, and Bosnia and Herzegovina.

Albania’s Foreign Minister Ilir Meta commented on the political crisis in the country in which the Socialist opposition has staged a hunger strike demanding a recount of the votes in last year’s elections by saying that the political tension had a negative impact on the image of the state.

“We went through a similar process in the 1990s but as a EU member we now know that political arguments have to resolved in the Parliament. It is extremely important for the EU integration of Albania to demonstrate maturity, and to achieve a consensus through dialogue in the present situation,” the Bulgarian Foreing Minister recommended.