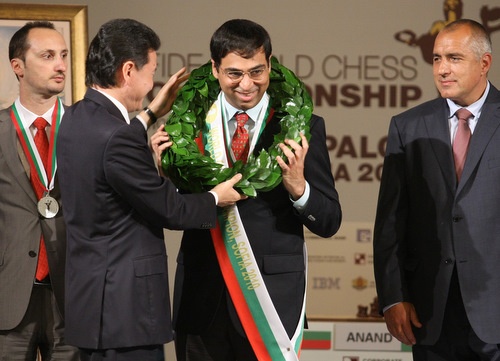 Anand and Topalov received their awards at a spectacular ceremony in the Central Military Club in Sofia, the venue where they played 12 games in April and May, 2010.

After two wins apiece and seven draws, Topalov gambled and lost to Anand in the very last 12th game, allowing the world chamion from India to retain his title.

The award ceremony was attended by Bulgarian Prime Minister Boyko Borisov and the President of the international chess federation FIDE Kirsan Ilyumzhinov.

Borisov officially closed the world championship match pointing out that there had been a lot of excitement in Bulgaria during the 20 days of the faceoff.

“India has 1 billion people, and Bulgaria has only 8 million so it is not shameful to lose by just one point,” declared Borisov referring to the final score – 6.5:5.5 for Anand. “Even though we are a bit disappointed, we are proud of Vesko, and let’s wish to Bulgarians to become second in the world in all spheres,” he said.

After the ceremony, Topalov commented before journalists that was disappointed because of the wins that he missed but that everything else in the Sofia world chess title match has worked out great.