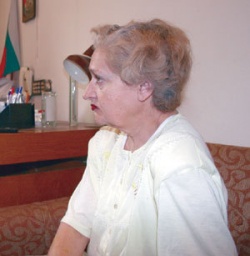 The birth of twins by 62-year-old psychiatrist Krasimira Dimitrova has spurred a motherhood age limit debate in Bulgaria. Photo by Standart Daily

Age cap on births has been demanded by the head of the Parliamentary Health Committee a day after a 62-year-old woman gave birth to twins in Northern Bulgaria.

“Science is progressing but we need an age limit for the women who want to give birth with medical assistance,” said Ivanov, regarding the case of the 62-year-old Krasimira Dimitrova who gave birth to twins in the city of Pleven on Wednesday.

According to Ivanov, some law changes are necessary and the age limit that should be accepted is around 40 years.

“It's not normal for a 62-year-old woman to become a mother,” said the member of the ruling GERB party.

Ivanov expressed his concerns with the children and mother's health condition due to the late pregnancy.

Medicine's achievements are wonderful, but they should not be in conflict with the moral, ethical and religious beliefs, Ivanov said.

62-year-old Krasimira Dimitrova gave birth to twins following an embryo transfer. This is the second global case of such late birth and the first in Bulgaria. Until now, there have been six cases of women above 60-years who have been impregnated with a donor egg.