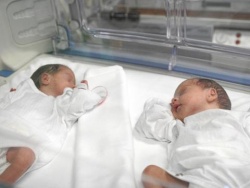 The twins are in good health despite being born prematurely and only weighing less than 1 kilogram each, local doctors reported. Photo by actualno.com

Krasimira Dimitrova, a 62-year-old from the Northen Bulgarian city of Ruse, has become one of the oldest mothers in the world after giving birth to twins.

The twins are in good health despite being born prematurely and only weighing less than 1 kilogram each, local doctors reported.

Her pregnancy was the result of an embryo transfer, Dimitrova told the Bulgarian 24 Chasa newspaper in an interview, adding that she was initially impregnated with triplets but doctors decided to remove one of the embryos.

'Age was not an obstacle for me... I so much wanted to have children,' she said.

Dimitrova, who is soon to retire from her position as a psychiatrist, said that she was resolved to become pregnant after the authorities refused to let her adopt a child because of her age. 'I would not like to look too much in the future. I hope that the babies will be well,' she said.

Georgi Hubchev, the doctor who delivered the babies, told the state BTA news agency that this was only the second case in the world of a successful embryo transfer to a woman aged over 60 resulting in the birth of twins.