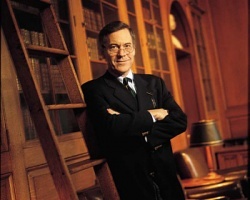 Steve Hanke, a Professor of Applied Economics at the Johns Hopkins University in Baltimore, forecast that the recession in Bulgaria will start to bottom out this year. File photo

Steve Hanke, a renowned economist, known best in Bulgaria as the architect of its currency board system, has voiced support for the tight fiscal policy of the center-right government.

Talking to the Bulgarian National Radio, Hanke however did not hide his disappointment over the failure of the cabinet of Prime Minister Boyko Borisov to push ahead with urgent reforms.

“The best Bulgaria can do to speed up its economic development is to implement social reforms,” he said.

Hanke, a Professor of Applied Economics at the Johns Hopkins University in Baltimore, forecast that the recession in Bulgaria will start to bottom out this year.

Asked to comment on reports that the government has approved a revised 2010 budget law that taps into the fiscal reserve to fill in gaps, he said that would not be a serious problem.

“As long as the fiscal reserve is used temporarily and the funds are restored later on, I can no problem with that,” he said.

The comment comes in the wake of reports that Bulgaria’s government has approved a revised 2010 budget law that taps into the fiscal reserve as it battles recession and seeks for ways to fill in gaps.

The fiscal reserve will slump from BGN 6.4 B to BGN 4.5 B at the end of the year, shows the revised budget that the government has tabled in parliament and which local Sega daily has obtained.

Prime Minister Boyko Borisov had previously said the country will issue debt to fill in the fiscal reserve and give a sign to foreign observers that the currency board is stable.

Bulgaria operates in a currency board regime, under which the lev is pegged to the euro, and is obliged to keep a fiscal reserve. At the end of March it stood at BGN 6.3 B, flat month-on-month, and down from BGN 7.95 B in the same period a year ago, data showed.

Bulgaria passed a 2010 budget planning for a 0.7% deficit, but was forced to revise that target to 2.4% at the start of the year.

Bulgaria’s budget deficit will reach 2.8% of gross domestic product (GDP) this year, after 3.9% in 2009, according to a European Commission forecast.

The government forecasts economic growth of 1% this year after a 5.1% contraction in 2009.