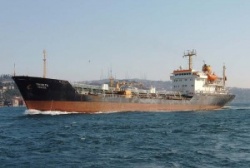 Bulgarian chemical tanker MV Panega has been hijacked by Somali pirates with 15 sailors on board. Photo by EU Navfor

A Bulgaria-flagged ship, MV PANEGA, has been hijacked in the Gulf of Aden by Somali pirates, EU Navfor Somalia announced.

The ship was on route from the Red Sea to India when she was attacked by pirates.

MV PANEGA with a dead weight of 5,848 tonnes, has a crew of 15 all Bulgarian, according to EU NAVFOR, which vows to continue to monitor the situation. All 15 Bulgarian sailors are believed to have been captured by the Somali pirates.

The news was confirmed by the Bulgarian Foreign Ministry late Tuesday night.

With Tuesday's hijacking, the total number of Bulgarian sailors kept by the Somali pirates rises to 28.