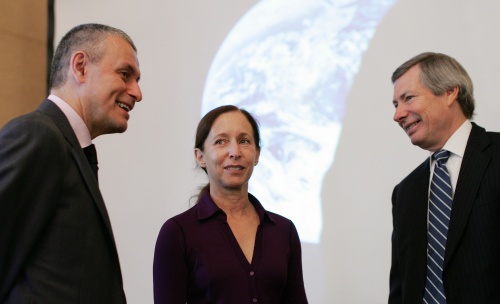 “Bulgaria's goal is to have a Bulgarian astronaut fly on a NASA Mission”, declared Monday Bulgaria's former Foreign Minister and President of the Atlantic Club, Solomon Passy.

Passy attended a public lecture by the American astronaut Marsha Ivins, “Life and Work in Space – Today and in the Future,” organized by the Atlantic Club in Bulgaria, reports BGNES.

The US ambassador to Bulgaria James Warlick has commented on the topic by saying that “It is a big dream and a vision for the future – a future for both Bulgaria and America."

During her Monday lecture Ivins pointed out that “There are people from many different nationalities working in the International Space Station. If we want to achieve something big in space, we must act as representatives of the planet Earth and not as members of different national communities. There could be life there.”

Ivins also expressed hope that the mission to Mars will be made possible during her lifetime and underlined the fact that new technologies need to be developed in order to achieve this. The American astronaut said that a mission to Mars won't happen any earlier than 2030 as scientists must first develop an energy source that will allow them to travel faster to Mars.

Ivins recalled the launch of the Apollo program and the landing of the Apollo capsule on the Moon. “This landing is not shot in Hollywood,” declared Ivins, thus dispersing rumors that the mission to the moon and the footage provided was a hoax.

The guest speaker also showed satellite photographs of the sand dunes in Alger, the Black sea, Sofia, Varna, Istanbul, Washington Paris, the Mississippi delta and many other parts of the world.

According to Ivins of humanity “finds a way to generate fuel on Mars, they could afford a long mission on the red planet and also easily travel to other planets. Our goal is to go to other galaxies and there are millions of them.”

„Anti-gravity makes you very strong, in a state of weightlessness you can lift up anything, but you can't stay in one place. The lack of gravity turns all liquid into solid balls. Food on board the ships is cooked and vacuumed in advance and the only thing you need to do is warm it up a bit,” explained Ivins.

There are musical instruments, laptops and a telephone on board a spacecraft. “We circle the Earth every 19 minutes and see how there are no national borders drawn. It's an amazing feeling to realize that you are not on Earth.”

Marsha Ivins is a veteran of five NASA space flights and has logged over 1,318 hours in space. She is currently assigned to the NASA Astronaut Office supporting the Space Shuttle, Space Station and Constellation Branches.

Georgi Ivanov was the first Bulgarian cosmonaut to fly in space in 1979 on board the Russian craft Soyuz 33. He entered the Soviet International Space Program in 1978 and after intensive training was selected for the fourth mission under the Intercosmos program.

Alongside the Soviet cosmonaut Nikolai Rukavishnikov, Ivanov was launched into space as part of the Soyuz 33 mission on April 10, 1979. Though take-off was smooth, the mission was a disaster, with severe damage of the engine preventing docking in orbit to Solyut 6 orbital station as it was initially planned.

A premature return to Earth was the only possible option for the two cosmonauts.