Tory Leader Urges Lib Dems to Work with Him 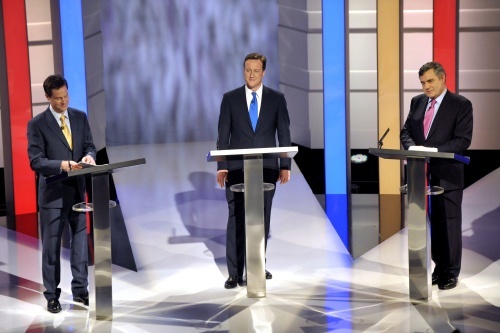 In a press conference Friday, Tory leader, David Cameron announced he would make an open offer to the Liberal Democrats.

As counting of ballots in Britain’s 2010 general elections is drawing to a close, it has become clear that the British Conservative party, which gained the most votes (302), will still fall short of a majority.

Cameron said Friday that he is proud of the election results but the “party must accept it has failed to win a majority.” Hence he is prepared to make „a big, open and comprehensive offer to the Liberal Democrats.”

Tory leader expressed readiness to work together with Lib Democrats to form a strong and stable government that Britain needs quickly – one that will deal with the war in Afghanistan, the economy and the cleaning up of politics, „problems which are too urgent to allow party bickering.”

Cameron said Friday that the manifestos of the Tories and the Liberal Democrats have a lot in common, emphasizing that the next British government should give less power to the European Union, exercise better control of immigration and start dealing with the budget deficit immediately.

The Tory leader said it is reasonable to expect the bulk of his policies should be implemented in a deal with the Lib Dems. But there are opportunities for negotiations, he added, citing education policy and the creation of a low-carbon economy.

There will be a new, modern Conservative Party in Parliament, confirmed Cameran Friday, adding that the increase in seats is bigger than Margaret Thatcher achieved in 1979, he adds. But the party "must accept" it has failed to win a majority.

The Liberal Democrats which have fallen back with a loss of 5 seats, have ended up with more power than in Britain’s previous elections, as now they will the king-makers in a cliff-hanging election.

With two thirds of the seats counted in the UK general elections, the opposition Conservative Party emerges as the largest party in the new Parliament but seems very likely to fall short of a majority.

David Cameron’s conservatives need 326 seats for an outright majority in the House of Commons. However, with 597 of the 650 general election results declared, they have 286 seats. The Labor Party of incumbent PM Gordon Brown has won 235 seats so far, and the Liberal Democratic Party – 50 seats.