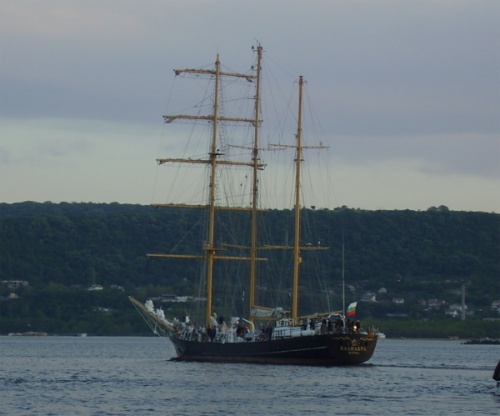 Barquentine Kaliakra will represent Bulgaria in the Tall Ships Regatta 2010 along the route of Jason and the Argonauts. Photo by vimpel.boinaslava.net

Bulgarian sailing boat Kaliakra has set off to the Greek port of Volos, which is the starting point of the 2010 Historical Seas Tall Ships Regatta, which will also include Bulgaria’s largest port Varna.

The Historical Seas Tall Ships Regatta takes place in May and early June 2010. Leg one of the Historical Seas Tall Ships Regatta will follow the route, according to legend, of Jason and the Argonauts in search of the Golden Fleece from Volos, Greece (May 12-15) through the Dardanelles into the Black Sea. The next port of call will be Varna, Bulgaria (May 21-24), departing on the country's National Day (May 24).

From there the fleet will race to Istanbul, Turkey (May 27-30), where the Regatta will be a centrepiece of the city's celebrations of its designation as European Capital of Culture in 2010. From there the fleet will cruise and race to Lavrion, Greece (June 4-7) close to Athens and a wealth of other historical and cultural sites in the region of Attica.

Even though Bulgaria’s Varna is included in the program of the 2010 Tall Ships Regatta, Bulgaria was close to having no representatives in the sea race.

The equipment of the barquentine Kaliakra was sponsored by Navigation Maritime Bulgare with a decision of its Supervisory Board. Thus, the company, which was privatized in 2008, has financed the participation of 25 young people as part of the crew of the sailing ship – 23 of them come from the Bulgarian Naval Academy, and 2 – from the Varna Technical University.

The sponsorship proved crucial for Kaliakra’s admission to the race because over 50% of the crew of each ship participating in the Tall Ships races must consist of young people.

Bulgaria’s “Black Sea capital” Varna expects a record number of some 200 000 to visit the Tall Ships Regatta sailing boats on bay at its port between May 21 and May 24. The local authorities and business have organized a number of events to celebrate the city’s inclusion in the regatta such as parades, concerts, open-door tours.

The Tall Ships' Races are races for sail training "tall ships" designed to encourage international friendship and training for young people in the art of sailing. The races are held annually in European waters and consists of two racing legs of several hundred nautical miles, and a "cruise in company" between the legs.

Between 1973 and 2003 the races were known as The Cutty Sark Tall Ships' Races, having been sponsored by Cutty Sark whiskey. Since 2004 the races have been supported by The City, Province, and Port of Antwerp.