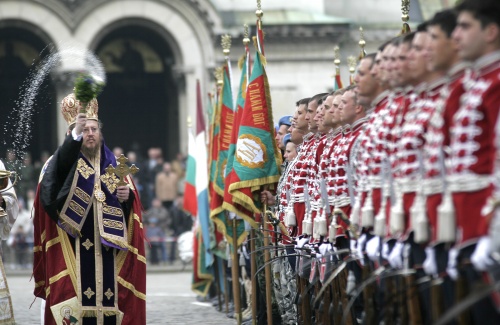 Bulgaria celebrated Thursday, May 6, the Day of Saint George the Victorious, and the Day of the Bulgarian Army.

Army Valor Day events are scheduled to take place around the country, including a national army parade in downtown Sofia.

Because of financial trouble of the Bulgarian Defense Minister, however, the 2010 Army Day parade will be significantly more modest than last year’s.

It will not feature any tanks or armored vehicles in order to save money from fuel, and only several fighter jets and assault helicopters will be witnessed at the event which started to draw a huge number of spectators in the recent years.

The holy martyr St. George the Victor has been considered one of the most important Saints ever since Christianity became the official state religion in Bulgaria in the 9th century.

A common ritual is to cook and eat a whole lamb, which is an ancient practice possibly related to Slavic pagan sacrificial traditions and the fact that St. George is the patron saint of shepherds.

Special place on the table is attributed to the ritual Gergyovden bread. All sorts of bread are made for the feast - the cross bread, the shepherd's bread, the large ring-bread, as well as small ones, or the special ring-shaped bun baked by the young wife in the house.