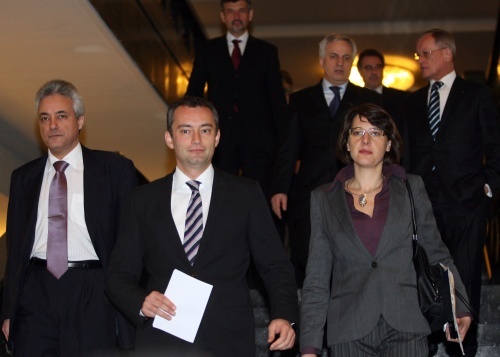 Bulgaria's Foreign Minister Mladenov (front middle) and his team are going to be presented with conditions by the Macedonian side over the Friendship Treaty. Photo by BGNES

Bulgaria’s Foreign Minister Nikolay Mladenov starts a visit to Macedonia and Serbia on May 5 to 8 as the first stage of a Balkan tour.

In Macedonia the minister is going to present the so-called “Friendship Treaty”, which Skopje is expected to sign but only if Sofia makes concessions on some of its most crucial points, according to Macedonia government sources.

In February 2010, after information was leaked to the Macedonian media, the Bulgarian government confirmed that a Friendship Treaty had been offered to Macedonia back in 2008.

Political circles in Skopje put forth the notion that Bulgaria is also setting conditions on Macedonia with respect to its EU and NATO integration, says the BNR report, not unlike Greece, which has blocked Macedonia’s accession to the organizations because of the notorious name dispute between the two countries.

Thus, in order to prove that it is committed to good neighborly relations, the Macedonian government is going to accept in principle the proposal made by Bulgaria to sign a Friendship Treaty but is going to present its concerns and demands to Foreign Minister Mladenov next Wednesday, says the report.

According to the BNR, the Macedonian side deems unacceptable clauses in the proposed treaty referring to “hate language” against Bulgaria in the Macedonian media, which is seen as compromising their “independence”, and sees as “indecent” the ideas to review the interpretation of historical events in Macedonian textbooks and to hold joint Bulgarian and Macedonian celebrations of historical anniversaries.

Another thorny issue is said to be the claims of the Macedonian state about the existence of a “Macedonian minority” in Bulgaria.

According to anonymous government sources, cited by the Macedonian paper Vreme, the Foreign Ministers of Bulgaria and Macedonia, Nikolay Mladenov and Antonio Milososki, are going to announce an agreement in principle for a bilateral Friendship Treaty, and will then have expert groups work out the problematic items in order to prepare the singing of the Treaty during the visit to Macedonia of the Bulgarian Prime Minister Boyko Borisov, scheduled for September 2010.

In March 2010, Macedonian papers expressed their outrage over leaked information about a ‘Friendship Treaty’ proposed by Bulgaria to the Macedonian government back in 2008, to which the Skopje authorities had not replied yet.

The reports said that 6 of the 21 items in the treaty – which the Bulgarian government recently announced it had proposed to Skopje in order to provide for good neighborly relations – are problematic.

According to the Macedonian press, Bulgaria used the proposed treaty to present itself as an elder brother of Macedonia. The provisions from the English-language version of the treaty which leaked to the press are as follows:

Item 10 of the proposed treaty says that ”the two parties should deepen their cooperation in the field of culture, their common culture, and cultural heritage... based on bilateral programs.”

Item 12 is reported to be providing for ”the protection of the joint cultural and historical heritage and organizing joint celebrations of historical events shared by the two countries.”

Item 13 focused on having Macedonia support the actions of the Bulgarian state and NGOs for the preservation of Bulgarian military monuments and cemeteries on its territory.

Item 17 stipulates that Macedonia should strictly confirm its commitment that there is nothing in its Constitution that can be used as a basis to intervene in Bulgaria’s internal affairs.