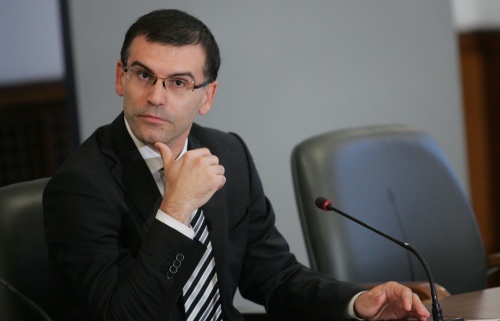 Bulgaria’s Finance Minister, Simeon Djankov, who left the World Bank to join the GERB cabinet says he has no aspirations to become the country’s next president. Photo by BGNES.

Bulgaria’s Finance Minister, Simeon Djankov, firmly denies speculations in the media that he would be a possible nominee of the ruling GERB party to run for president in 2011.

In an interview for the TV channel bTV, Djankov declared he is an expert, not a politician and is firmly committed to remain an economist without any political aspirations.

“My role is to work for economic recovery, not to become president,” Djankov said.

On Friday, the leader of the Citizens for European Development of Bulgaria (GERB) party and Prime Minister, Boyko Borisov, said the party presidential nominee will be a Deputy PM. There are two such deputies in the GERB cabinet – Djankov and Interior Minister, Tsvetan Tsvetanov.

On other topics, the Finance Minister pointed out unemployment in Bulgaria is down in the last month and a half, the April economic data is the best in 17 months, demand and consumption are up, while the Customs Agency announced Friday they increased the revenue collection by 20%.

“The Bulgarian economy is recovering from the crisis, regardless of what the previous incompetent cabinet members are blabbering about,” Djankov pointed out.