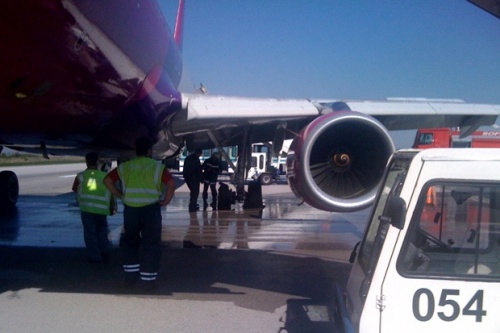 A Wizzair plane had to make an emergency landing at Sofia airport. Photo by Dariknews

An Airplane of Hungary's low cost airline company Wizzair is said to have made an emergency landing at 16.30 pm at Bulgaria's Sofia Airport.

The plane's tires have burst and caught fire upon touchdown.

There were 160 passengers on board the plane that traveled from Venice to Sofia. No one was injured in the incident, however, Sofia Airport has declared an emergeny situation.

The hydraulics of the airplane will be checked and experts will probe into why the tyres of the plane burst upon touchdown.

Sofia Airport officials have announced that there will be delays in two of its scheduled flights as the Wizzair plane needs to be pulled out of the landing strip.