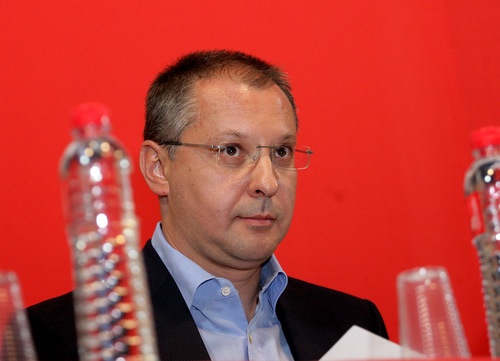 Sergey Stanishev appears to be facing growing discontent with his leadership within the Socialist Party. Photo by BGNES

After tumultuous debates, the National Council of the Bulgarian Socialist Party (BSP) has decided to convene an emergency party congress in the fall of 2010.

According to political commentators, the party leader Sergey Stanishev, who is facing increasing internal opposition, has managed to keep the situation under control by getting an approval for his idea to hold a party congress in the fall instead of in the summer of 2010, as was demanded by his intra-party opponents.

“If someone has enough confidence in themselves, let them run for the position of Chair of the BSP, let them state it clearly, there is enough time,” Stanishev declared during Friday’s meeting of the National Council of the Socialist Party.

He said that the rumors that appeared over the past week that the internal opposition in the party was preparing the holding of an emergency congress in the summer in order to elect a new leader and had even started collecting signatures in favor of his ousting had started to overshadow the worthy initiatives of the Socialists.

“I have not grabbed desperately on to the Chair position but I am also not used to evading responsibility. I would like to believe that there will be peace and internal consolidation within the BSP after this meeting, instead of new fights and criticism,” Stanishev said in his speech.

“Comrade Stanishev, why don’t you answer two questions – do you intend to be the leader of the party during the local elections in October 2011? Are you ready to become our candidate for President?,” asked the Mayor of Blagoevgrad, Kostadin Paskalev.

“Nine months after the parliamentary elections, given the absolutely incompetent present government, we are still at rock bottom. I am not taking part in any plots. Several months ago I stated that I will demand Stanishev’s resignation if the Socialist Party is doing poorly,” he elaborated.

“Bulgaria is being governed by a triumvirate – PM Boyko Borisov – who is either on TV, or on the phone; Interior Minister Tsvetan Tsvetanov who is arresting strippers with machine guns, and all Finance Minister Simeon Djankov who is in charge of all other issues having to do with economy, education, social policy, etc,” stated BSP National Council member Ivelin Nikolov who believes the Socialists are the only force that can stop the GERB government.

“I don’t think that this is the right time to decide on our candidate for the Presidency. This will be like running from the wind. Such decisions have to be careful and adequate to the situation,” Stanishev has replied.

“I intend to be the leader of the BSP during the local elections in 2011. My ambition is to lift up the party after the severe defeat that we suffered in the last elections,” the Socialist leader vowed.

Before the meeting of the National Council of the BSP on Friday, one of its senior members and former head of the State Agency for Youth and Sports, Vesela Lecheva said on TV that the only figure which could unite the leftist forces in Bulgaria was the acting President, Georgi Parvanov.

According to the decision adopted Friday with 78 votes in favor and 19 abstaining, the BSP will hold an emergency congress on October 16, 2010, as proposed by Sergey Stanishev.

The new congress will be held exactly an year after the last party congress, also an emergency one, which was called up after the staggering parliamentary election loss in July, when the BSP got only 18% of the votes vs. 40% for Borisov’s GERB party.

Stanishev did not resign after the loss submitting his resignation only on the day of the party congress, October 18, 2010, only to be reelected a couple of hours later with 60% of the votes of the delegates. He faced three other competitors none of whom managed to muster more than 15%.