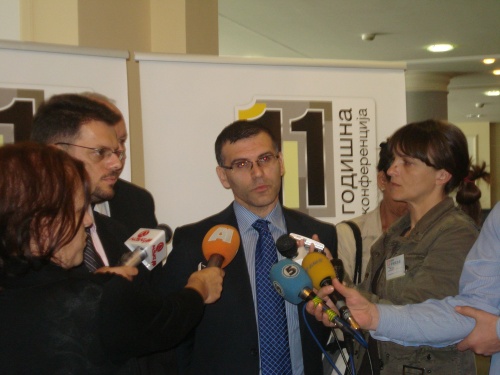 Bulgaria and Macedonia have to focus on intensifying exchange of expertise and information with respect to finances and economic growth measures, Finance Minister Djankov said in Ohrid.

“We can guarantee the sustainable economic development of the Balkans only with joint efforts,” said Simeon Djankov after meeting his Macedonian counterpart Zoran Stavreski.

Djankov was a special guest Friday of the 11th annual conference of the Macedonian stock exchange in the town of Ohrid.

The two Deputy PMs and Finance Ministers agreed to coordinate their efforts with respect to the measures to overcome stagnation in the region.

They evaluated highly the cooperation between the revenue administrations of the two countries pointing out that only 55 customs violations were registered since 2009 on the Bulgarian-Macedonian border, and these were mostly smuggling of small quantities of cigarettes from Macedonia.

Djankov has pointed out that Bulgaria is among the leading foreign investors in Macedonia but that the bilateral trade had to be stimulated further. He confirmed Bulgaria’s support for Macedonia’s EU integration.

During the 11th annual conference of the Macedonian stock exchange, Bulgaria’s Finance Minister spoke about the condition of the capital market in Bulgaria, and presented to the participants in the forum the opportunities for financial cooperation in Southeast Europe.