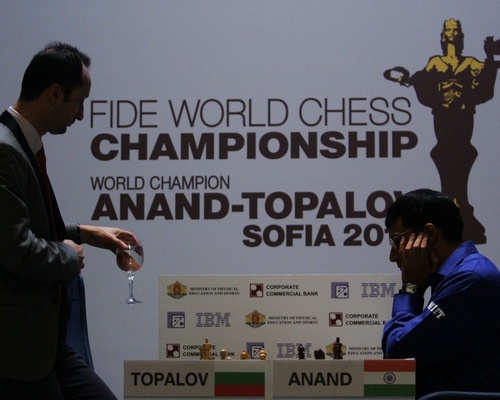 Bulgaria's Topalov (left) and India's Anand (right) wait in the dark as a power outage in downtown Sofia cut into their fifth game of the World Chess Title Match about 1.5 hours after it started causing a break of 13 minutes till a generator kicked in. Ph

A brief power outage in the downtown of the Bulgarian capital Sofia disturbed chess masters Viswanathan Anand and Veselin Topalov during the 5th game of their World Title match.

The fifth game was opened after a short ceremony by Nobel Prize laureate, Columbia University economics professor, Robert Mundell, who made the first move for Bulgaria’s Topalov with the white pieces. 77-year-old Mundell, also known as “the father of the euro”, was invited to the game by team of the Bulgarian chess master.

About an hour and a half into the game, and just as Mundell’s press conference had started, the electricity in the Military Club building in downtown Sofia where the Anand-Topalov games are played, went off.

The power supply was restored 13 minutes later as an emergency generator kicked in. The opponents continued the game after the brief pause, and Mundell’s press conference was completed after the electricity was restored.

The organizers of the Sofia World Chess Title Match have apologized for the power outage with the following letter published on the official website of the sports event:

between the World Champion

The Organizing Committee of the Match for the World Title in Chess between the World Champion V. Anand and V. Topalov would like to apologize for the inconvenience during the fifth game due to cut in the electricity power supply. It was caused by general failure in the electrical system in central Sofia, which affected also the emergency power generators.

We have taken all the needed precautions to prevent from future incidents till the end of the match.

An official statement by the Ministry of Economy and Energetics and the power supplying company CEZ will be presented to you later on.