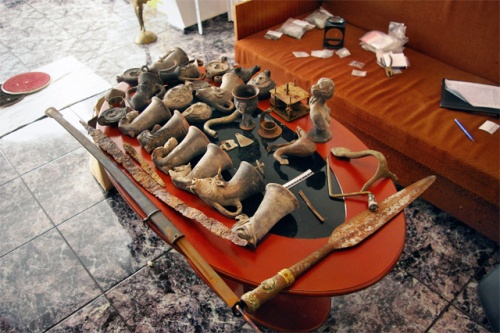 The archaeological treasures seized in Nova Zagora by the Bulgarian Police. Photo by Interior Ministry

Bulgarian police have captured a number of invaluable archaeological finds in a police operation in Sofia and the eastern town of Stara Zagora.

The operation was carried out by the Unit for Combating the Traffic of Cultural and Historical Items of the main directorate for fighting organized crime (GDBOP), the police directorate in the city of Sliven announced.

In Sofia, the police searched about several addresses where they seized two ancient ceramic vessels, 9 silver Roman coins, an ancient bronze application with a silver image of Medusa, and a metal detector.

Simultaneously, the police searched two locations in Nova Zagora where they found over 500 ancient coins, jewelry, medallions, ceramic figurines and vessels, horns encrusted with horns, a bronze head – all from the period of Ancient Greece, Thrace and Rome.

In addition, the police discovered several artifacts dated back to the Middle Ages, “of high historical and artistic value” which are not described in detail by the police.

One man who is known to be a treasure hunter and dealer of antiques has been detained in Nova Zagora.