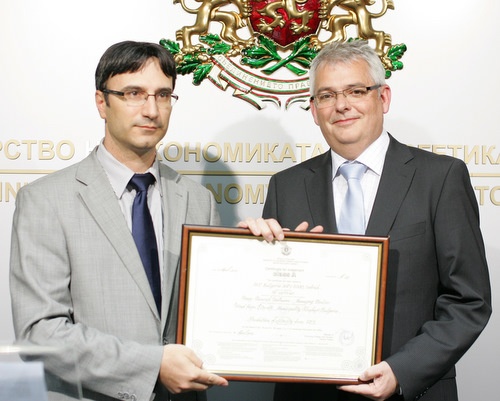 The two projects were awarded by Minister of Economy, Energy and Tourism, Traicho Traikov, in the presence of German Ambassador to Bulgaria, Matthias Hoepfner.

The first awarded project is “Wind Park Lozenets” of the firm IWC Bulgaria VP 5 headquartered in the northeastern Bulgarian city of Dobrich, which is a subsidiary of the German company IWC GmbH (“Innovative Wind Concepts”). IWC is a joint venture of Siemens Project Ventures (SPV) and Windkraft Nord AG.

The Lozenets project provides for the installment of 59 wind power generators with a total electricity production capacity of 140 MW.

The wind energy park will be located on leased plots near the villages of Lozenets, Zementsi, and Zagortsi in the Krushari Municipality. It is forecast to produce about 350 000 MWh of electricity per year, and to be completed in 2013.

The total investment in the Lozenets park is BGN 440 M; the money comes from the funds of the German investors and from bank credits.

Pipelife Bulgaria is the second company which was awarded an “Investor Class ‘A’” status for its project to build a factory for plastic pipes in the town of Botevgrad, northeast of Sofia.

The first two lines of the new factory will be launched in May 2010; the Botevgrad plant will be the 30th production facility of the parent company Pipelife.

The factory will be producing pipes for water supply and sewerage systems, water transport, gas and electricity systems. The total investment in it amounts to EUR 32.4 M.

Pipelife is a joint venture of Belgian chemical and pharmaceutical producer Solvay and Austrian construction materials producer Wienerberger. It produces plastic pipes, fitting and pipe systems, and has operations in 27 European countries and the USA.