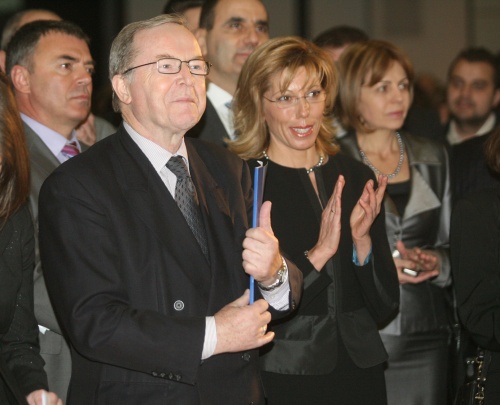 Rumiana Jeleva (right) shown here with EPP Chair Wilfred Martens about a month after her political fiasco. Photo by BGNES

There is a political mafia in Bulgaria including circles which are interested to be in power all the time, according to former Foreign Minister and failed EU Commissioner-Designate Rumiana Jeleva.

In her first TV interview after she resigned as Foreign Minister and Commissioner-Designate in January 2010, Jeleva hinted that Bulgaria’s former EU Commissioner Meglena Kuneva might have been involved in the factors that attacked her bid.

“Someone sent letters to the current EU Commissioner for Transport, Siim Kallas, and now Kuneva has become his political advisor,” said Jeleva speaking on bTV, reminding that Kallas was the EU Commissioner for Administration, Audit and Anti-Fraud in the First Barroso Commission.

Jeleva’s hearing as the EU Commissioner-Designate for humanitarian aid failed as her nomination was attacked on the grounds on conflict of interests – allegations that were never fully proven or disproved – and because of her unsatisfactory performance during her EP hearing. The political conundrum within the EU following her hearing led her to resign all positions except for that of being a Deputy Chair of the European People’s Party.

“People who belong to a certain political formation do not act solely on their own behalf,” said Jeleva referring to MEP Antoniya Parvanova from Bulgaria’s National Movement for Stability and Prosperity, Kuneva’s party.

“I was tarnished. The outcome of any hearing is clear if the people who take part in it are prejudiced. On January 15, Mr. Barroso came up with a position that I am competent to be EU Commissioner,” Jeleva said.

“I am happy that the events which followed – even though they were tragic ones – proved the importance of the EC portfolio that I was assigned,” explained the former Bulgarian Commissioner-Designate referring to the earthquakes in Haiti and Chile.

Jeleva did not say if and when she would once again become involved in politics within Bulgaria’s GERB party but mentioned she remained a party member and focused on her work as a Deputy Chair of the EPP.

When asked about the present activities of her husband, banker Krasimir Jelev, whose past fueled various rumors in Brussels at the time of her EC nomination, he was "dealing" with her.

"I know about politics that there are ups and downs, and that posts are transient," stressed the ex Bulgarian Foregin Minister.