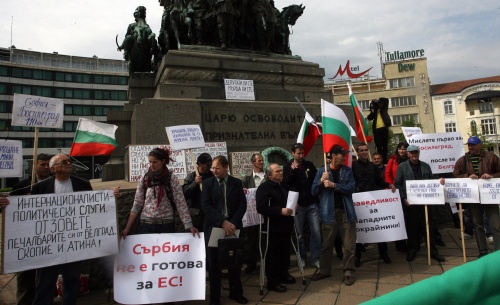 "Think about Bosilegrad first, and about Belgrade second!" and "Justice for the Western Outlands" read some of the banners of the Bulgarians living in Serbia raised before the Parliament in Sofia. Photo by BGNES

The pretext for the protest was last week’s meeting of the heads of the Parliaments of Bulgaria and Serbia, during which the Bulgarian Parliament Chair Tsetska Tsacheva expressed what appeared as unconditional support on part of Bulgaria for Serbia’s EU aspirations.

This enrages the people in the Bulgarian-populated municipalities of Bosilegrad and Dimitrovgrad (Tsaribrod) (the so called “Western Outlands”) who insist that the Bulgarian state should made its support for Serbia’s EU accession conditional on the protection of their human and minority rights.

“Where is the Minister for Bulgarians Abroad?”, “It is easy to be a Bulgarian here, it is hard to be a Bulgarian in the Western Outlands!”, “Serbia is not fit to join the EU!”, “Gives us back our Bulgarian citizenship!”, read some of the banners raised by the Bulgarians from Bosilegrad and Tsaribrod at the rally.

The Bulgarian minority in Serbia demands education and church services in Bulgaria as well as economic aid and investments because of the really high unemployment in the respective region.

The rally before the Bulgarian Parliament was organized by the Helsinki Committee for defending the rights and freedoms of Bulgarians in Serbia, which also submitted a letter of protest to Parliamentary Chair Tsacheva last week.

“Expressing the logical disappointment and deep outrage of the Bulgarians in the Western Outlands (i.e. the historic name of the lands of the Bulgarian minority in Serbia), we would like to remind Mrs. Tsacheva that Serbia has not fulfilled its international commitments to turn in the last two war criminals to the Hague Tribunal, and that it continues to violate human and minority rights on its territory, the most obvious example for that being the Bulgarian minority,” says the declaration of the Committee signed by its Chair Zdenka Todorova.