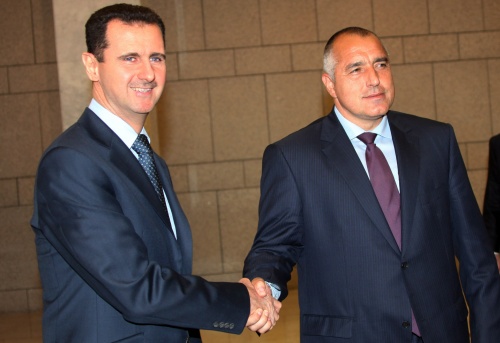 As a member of the EU, Bulgaria has an extremely important role to play in the resolving of the Middle East conflict, Syrian President Bashar Al-Assad told a Bulgarian delegation.

Bulgaria’s Prime Minister Boyko Borisov met with the Syrian President on Monday as part of a formal visit of a state delegation including Foreign Minister Mladenov, Finance Minister Djankov, and Economy Minister Traikov.

“Your visit in a year which is decisive for the peace in the Middle East has a very important meaning to us,” said Bashar Al-Assad to Borisov, as cited by Darik Radio.

Both state leaders expressed their desire to restore very dynamic Bulgarian-Syrian relations from the past decades.

At the same time, the members of the Bulgarian Cabinet participated in a bilateral business forum.

One of the questions on the agenda of the Bulgarian-Syrian relations is the settlement of the Syrian foreign debt to Bulgaria amounting to about USD 80 M. The governments of Bulgaria and Syria are expected to settle the question about the precise sum of the debt, as well as to sign a number of bilateral agreements.