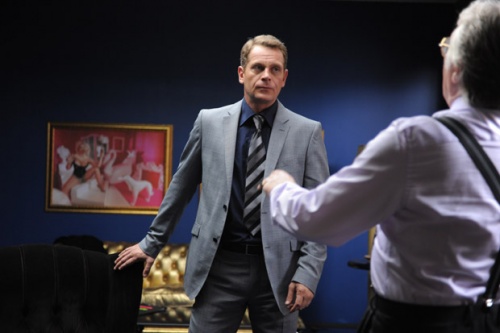 Bulgarian actor Yulian Vergov cast as the Ambassador to London in the comedy “Mission London.” Photo by SIA

With 46,291 admissions earned over its first weekend, "Mission London," a Bulgarian-produced feature film directed by newcomer Dimitar Mitovski, has proved to one of the strongest Bulgarian domestic releases in a generation and the third highest grossing opener ever.

Sofia-based A Plus Films, which is distributing the pic in Bulgaria, told Variety that the response of moviegoers to "Mission" has been unprecedented with its April 16 opening weekend almost rivaling "Avatar's" total of 48,124 tickets sold.

"The film is a breakthrough phenomenon," said A Plus's Christo Dermendjiev, "because Bulgarian films during the past 25 years have always been very poorly attended. The film was playing to sold out auditoriums during the opening weekend."

For the film's distrib, the film's success is as unexpected as it is unprecedented.

But audiences appear to be responding to the feature's strong entertainment values, often lacking in art-based local productions.

A comedy of errors, "Mission London," starring Tomas Arana ("Gladiator") and Bulgaria's Julian Vergov, is the story of a Bulgarian First Lady who throws a London party with the obsessive hope of attracting the attendance of Queen Elizabeth II, but lures a look-alike instead.

"Mission London" arrives in Bulgaria just as the nation's post-Communist exhibition infrastructure is rebuilding. Bulgaria boasts 111 screens nationally, with over half (62) in the capital of Sofia; 59 of Sofia's screens are located in its five multiplexes with 10 additional plexes situation elsewhere in the territory.

"Mission London" was produced by Bulgaria's SIA and is distributed internationally by U.K.'s Stealth Media.