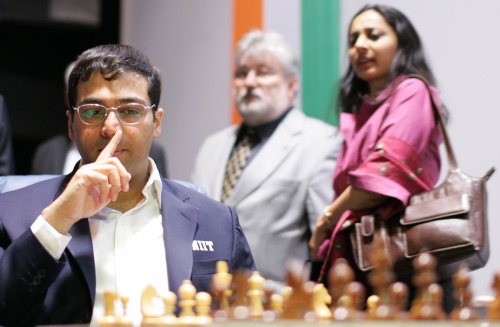 World Chess Champion Viswanathan Anand of India is checking out the hall at the Sofia Military Club where he will face Bulgaria's Veselin Topalov in the World Chess Title Match. Photo by BGNES

Bookmakers and chess master disagree over who is the favorite in the World Chess Title Match in Sofia, Viswanathan Anand of India or Bulgaria's Veselin Topalov.

The first game of the match is scheduled for 3 pm on Saturday as it was put off by a day because world champion Anand had troubled getting to Sofia when air traffic in Europe came to a standstill over the Iceland volcanic ash cloud.

According to the colleagues of the two players, however, Topalov is in a slightly better position to win precisely because the match is in Sofia.

“First, of course, I hope, as every chess player, it will be an interesting match. Because, OK, everybody wants to see something. We know both of them like to attack, to sacrifice something, and to play good chess. In this match, if I will bet, I will bet for Topalov, because he will play in Sofia. He has better chances, because last time he played bad against Kamsky but now I think he wll play well. It’s not possible he will play bad twice!,” Azerbaijani player Vugar Gashimov who is 12th in the FIDE ranking told chessvibes.com.

“First of all I expect this to be the most interesting match since Kasparov-Kramnik. I think in Sofia Topalov is the slight favourite but I think otherwise the chances would be completely equal. He usually plays good there, and also I think Vishy doesn’t like to be under pressure so it will be a little bit difficult,” Alexander Grishuk, 7th in the FIDE ranking, is quoted as saying.

According to another Russian chess master, Sergey Karjakin, “Maybe it’s a little bit to the advantage of Veselin because he’s a little bit younger and I think basically he has more energy than Vishy but I don’t know, we will see.”

Topalov and Anand will play 12 games. In case they finish with a tie, they will hold a tiebreaker including 4 games of fast chess.