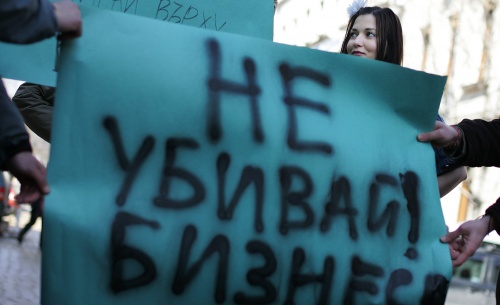 The Bulgarian business sees tax amnesty as a way out of the persisting economic crisis. Photo by BGNES

The Bulgarian business has asked for forgiveness of tax liability as a means to counteract the economic crisis.

The announcement was made Thursday at the extraordinary meeting of the Consultative Council of the National Revenue Agency (NAP).

The Council is comprised of 50 representatives of the biggest branches of the Bulgarian economy.

On Thursday, the business representatives asked for tax amnesty of the undeclared revenues of their legal business and have suggested that all transfers to offshore zones be taxed.

This last measure is said to be a good practice in France and Spain which have already introduced 25% taxation of the offshore transfers.

According to the Bulgarian business, the endorsement of the measure will ensure greater economic transparency in the country.

At the meeting an agreement was reached that Bulgarian branch organizations will submit a preliminary revenue forecast, including expected taxes, by May 5.

NAP presented on Thursday statistical data of the budget revenues for the first quarter. The value-added tax revenues of the Bulgarian government have dropped by about BGN 800 M when compared to those of 2009.

The construction business, tourism and the mining industry have been most affected by the financial crisis, according to experts.

Bulgaria’s Finance Minister Djankov, however, said that the country is starting to come out of the crisis. Forecasts are that in the second quarter of the year the drop will stop and there will be a growth in the economy.

Two weeks ago Djankov announced that VAT company refunds for the first three months of the new year amount to about BGN 400 M, and that an amount of around BGN 308 M remains to be refunded to private businesses.

The fewer state revenues at the beginning of 2010 have urged the Borisov government to seek emergency measures to raise money or to cut state spending in order to alleviate the situation of the state budget.