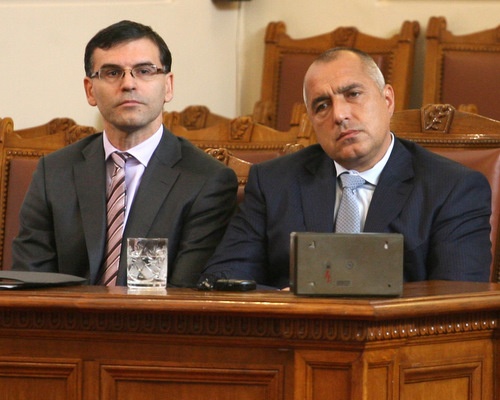 Bulgaria's Finance Minister Djankov (left, pictured with PM Borisov) has promised the economic recovery is on its way. Photo by BGNES

Bulgaria has started to overcome the economic crisis in the second quarter of 2010, according to Finance Minister Simeon Djankov.

“In the first quarter, we have been paying out sums owed by the state to tobacco producers and other agricultural producers. To do that, we used revenues raised by the Customs Agency. It has turned out that we had smaller revenues that expected but starting in April, we are going to have a balanced budget, or we might even have a small monthly surplus. It is crucial to demonstrate that we are in firm control of Bulgaria’s finances despite the difficulties generated by the financial crisis,” Djankov said on the BNT 1 TV Thursday.

The Minister vowed to carry out a large-scale administrative reform by optimizing the civil servants staff and bringing it down to the 2005 numbers.

“We are going to optimize the administration – this means a lot more than just layoffs. We will do so that those who work well would be getting paid more,” Djankov said while slamming the Stanishev government for expanding unnecessarily the number of the civil servants after 2005.

In his words, the administrative reform was aimed at equalizing the salaries of the employees of the various ministries.

“At present, a head of a ministerial department gets about BGN 1 000 per month. After the optimization, the average salary will rise to BGN 1 200 per month. Of those, BGN 850 will be the base salary, while the rest will come from bonuses paid on the basis of performance,” Djankov explained.

“Only the number of Interior Ministry employees will remain higher but things in Bulgaria are more centralized than elsewhere. Our colleagues there have more work than in the other ministries because Bulgaria is only now introducing the rule of law,” he declared.

Facing much criticism that the Borisov government has delayed long overdue state payments to private companies for public procurement projects over the recent months, Djankov said that the government was trying to figure out ways in which to pay private business only for work they had actually performed.