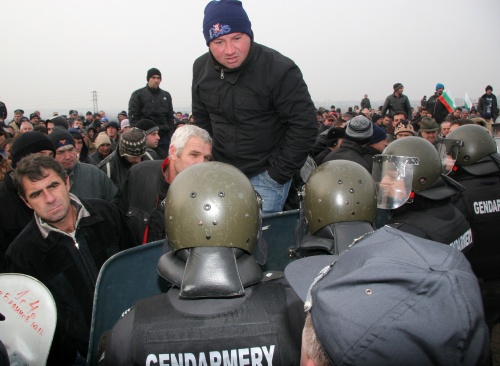 Bulgarian tobacco growers battled with police and gendarmerie as they tried to blockade the Danube Bridge road near Ruse. Photo by BGNES

Protesting tobacco producers clashed with police as they attempted to blockade the road to the Danube Bridge connecting Bulgaria and Romania near Ruse.

The protesting farmers did not have a permit to blockage the international road but tried to do so nonetheless. This immediately let to a fight with the policemen guarding their protest rally.

Only the immediate arrival of 70 gendarmerie officers helped the police gain control of the situation. The Danube Bridge road was blocked for about five minutes during the skirmish early Wednesday afternoon.

After they were fended off by the police, the tobacco producers continued their protest rally near Ruse. The police arrested several of the protesters but it is still unclear whether any charges will be raised against them.

According to Fikret Bekir from the Bulgarian National Tobbaco Producers’Association, the protesters are demanding that due state subsidies for tobacco that has already been produced and sold should be apportioned evenly between the producers.

Bulgaria’s Agriculture Minister, Miroslav Naydenov, who spoke at a news conference in Sofia, the protests are caused by contradictions among different groups of producers growing different sorts of tobacco.

“We accept that there will be those who might be dissatisfied. It is their right to protest,” Naydenov said.

He announced the new state subsidies for the various sorts of tobacco saying that the government had approved them in accordance with the recommendations of the Parliamentary Committee on Agriculture.

The Minister pointed out that Bulgaria had a quota approved by the EU, and a maximum subsidy of BGN 116 M that it could apportion among tobacco growers. He explained that the fact that the subsidies per produced unit of tobacco were lower in 2009 than they were in 2008 was became more tobacco was produced in 2009.