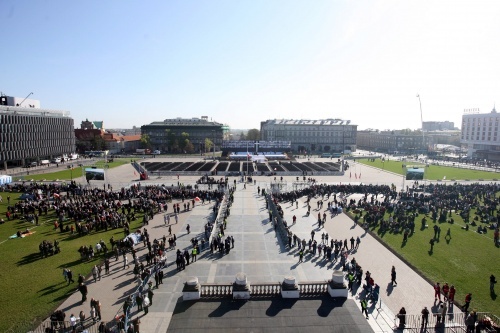 Many world leaders cannot attend because flights have been grounded by Iceland's volcano. Photo by BGNES

Thousands of people are gathering in Krakow for the state funeral of Polish President Lech Kaczynski.

After a funeral Mass, the president will be buried in Wawel Cathedral, the resting place of Poland's kings and national heroes.

The decision to entomb a leader seen as divisive by many during his lifetime in such a hallowed place has sparked protests, the BBC reported.

He and 95 others died eight days ago when their plane crashed in fog en route to a ceremony in Russia.

Many world leaders cannot attend because flights have been grounded by Iceland's volcano.

The state funeral will begin with a Mass at Krakow's St Mary's Basilica. From the city's mediaeval market square, the coffins of the first couple will be carried along a route lined with Polish flags with black ribbons and photos of Lech Kaczynski and his wife Maria.