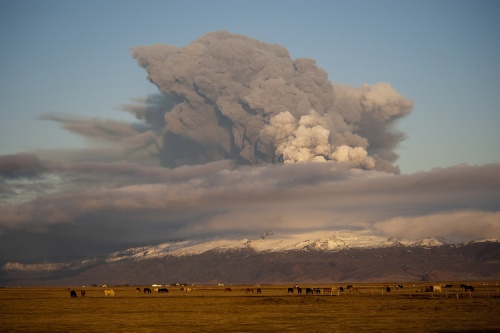 A general view shows smoke rising as an eruption of the volcano near Eyjafjallajoekull glacier occurs, some 120 km away from Reykjavik, Iceland. Photo by BGNES

The activity of the volcano under the under the Eyjafjallajokull glacier in Iceland is intensifying, Iceland scientists, cited by the Russian information agency ITAR-TASS, report Saturday.

The ash column is now 8.5-meters high. Magnus Tumi Gudmundsson, a volcano expert from Iceland University is quoted as saying that winds have dispersed the clouds above the volcano and scientists were able to fly over it and assess its activity for the first time Saturday.

Only after scientists find out how much ice has melted due to the eruption they will be able to forecast with more certainty the duration of the volcanic activity.

Gudmundsson warns that as long as there is enough ice, more ash columns can form above the volcano to trigger more disruptions in air traffic across Europe.

The current disruptions that led to the cancellation of a total of 17 000 flights and left thousands stranded at airports around the globe are caused by an ash cloud, which formed when the fast-meting ice from the glacier above the volcano cooled down the hot magma.