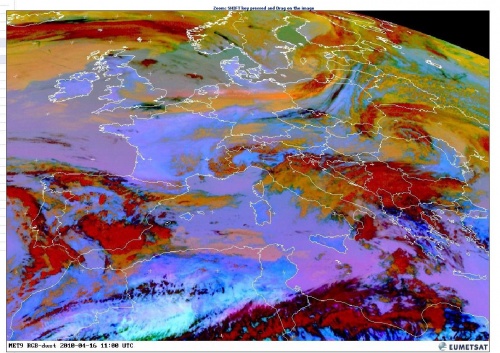 The satellite picture of the air space over Europe shows the ash clouds from the volcanic erruption in Iceland, photo by EPA/BGNES

The volcanic pollution that spread all over Europe after the eruption of a volcano in Iceland will not reach Bulgaria, said Bulgaria's Ministry of Transport.

Forecasts show that the ash clouds will not go as far as Bulgaria. They will reach Moldova, envelop northern Romania, most of Hungary and Austria, and spread all the way to the Gulf of Venice.

At the end of March, the Eyjafjallajoekull volcano, which had been dormant for 200 years, erupted in south Iceland. Its drifting ashes have gradually reached large parts of Europe and have wrought havoc at European airports, with some 17 000 flight cancellations a day. Many flights to and from Bulgaria's capital Sofia were also canceled on Friday.

Hundreds of thousands of passengers have been affected and severe disruptions could extend to many days to come, including flights to North America and Asia over the volcano’s continuous ejection of ash and smoke while scientist say they do not expect the volcanic activity to end in the next few days.

Research of volcanic ashes started back in 1982 and was triggered by the first ever airplane accident caused by volcanic pollution. That year Boeing 747 flying from Kuala Lampur, Malaysia, to Perth, Australia, crossed a volcanic cloud, all four of its engines stopped working and after a couple of unsuccessful attempts, the pilot finally made an emergency landing in Indonesia's capital Jakarta.