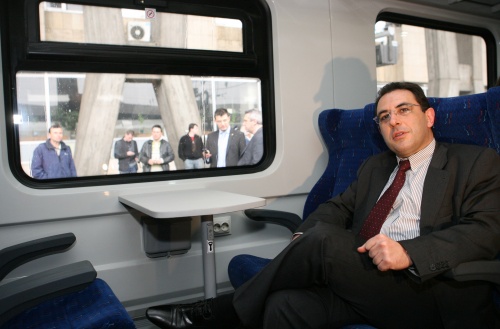 Bulgaria's Transport Minister Alexander Tsvetkov was one of the first passengers on the relatively "high-speed" Sofia-Burgas weekend train launched Friday. Photo by BGNES

“We are working on a project to provide WiFi in train stations and in some of the express trains by the end of the year. Our goal is to make the BDZ a more market-oriented company. It has not changed its ways in the past 40 years!”, announced Transport Minister Alexander Tsvetkov.

On Friday, Tsvetkov was among the first passengers of the new “Weekend Train” of the BDZ which travels from the capital Sofia to the Black Sea city of Burgas making only one stop on the way – in the city of Plovdiv.

The weekend Sofia-Burgas train will be available in the spring, summer, and fall. The entire equipment in the train is brand-new, and the railway cars have been recycled. It will be making the Sofia-Burgas distance in 5 hours and 40 minutes. The round-trip ticket costs BGN 28.

The renovation of each of the railway cars cost BGN 950 000. The train includes five cars and a restaurant.

The BDZ is preparing to launch a second “Weekend Train”, this time from Sofia to the other major Black Sea port of Varna, which is going to have two stops before reaching its final destination.