Bulgarian NGO Thrown Out of Parliament over Smoking Law Protest 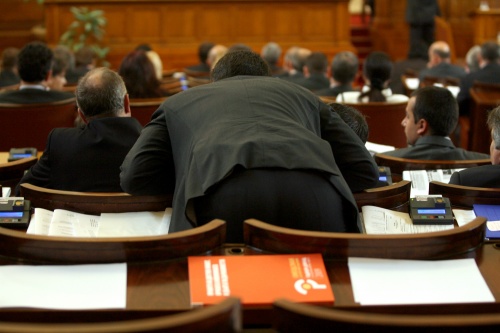 A Bulgarian MP bends over to talk to his colleagues during Friday's parliamentary session which included heated debate on the planned smoking ban. Bulgarian MPs have agreed to put off their decision on whether to water down the much anticipated smoking ba

Activists of a civic movement protesting the ruling majority’s plans to water down the much expected ban to smoke in public places have been thrown out of the Bulgarian Parliament.

Members of the Civic initiative “Bulgaria without Smoke” were raising their voices in protest inside the Parliament building as the MPs were debating the much disputed legislation, which is supposed to introduce a more permeating smoking ban, doctoronline.bg reported.

“The government is not very happy by the fact that there is a civil society in Bulgaria which is fighting for its right to be able to sit down and have a drink without being choked to death by cigarette smoke,” said one of the leaders of the protesters Mariana Todorova as the “Bulgaria without Smoke” activists were kicked out of the building of the National Assembly after they tried to protest from the balcony of the plenary hall as the MPs were debating.

“We are going to continue to protest until the amendment ensuring all-out smoking ban in public places becomes a reality. The non-smokers in Bulgaria have been extremely patient, and have been in an unfavorable position for a long time. But this time we are not giving up. The government does not want to institute a full-fledged smoking ban because it is going to lose a lucrative market and a source of budget revenue,” said Todorova from “Bulgaria without Smoke.”

Bulgaria’s ruling party GERB has come over harsh criticism by its allies from the right Blue Coalition over its ideas to relax the expected smoking ban.

After debating for a couple of hours, the Bulgarian MPs failed to reach an agreement on the relaxation of the ban, and decided to continue the debates next week – 129 out of 142 present MPs voted in favor the postponement.