Posthumous Award for the King Who Saved Jews 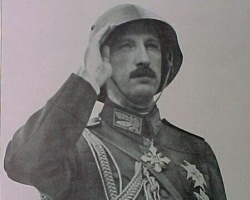 King Boris III of Bulgaria has received a posthumous award for saving his country's Jews during the Holocaust by refusing to surrender the 50,000 Jews in Bulgaria to the Nazi army despite heavy pressure from Adolf Hitler.

The award was given to his grandson, Toronto banker Hermann Leiningen, and Chabad organized the award ceremony. The award itself was presented by a group of Bulgarian Jews whose lives were saved when the king refused to deport them.

King Boris III previously has been honored by the Anti-Defamation League.

However, his legacy remains somewhat controversial: while he refused to hand Bulgaria's Jews over to Hitler's army, he did allow the deportation of Jews from Thrace and Macedonia, which at that time were under Bulgarian rule. In addition, some historians say the king expressed willingness to deport Jews, but was stopped by the heads of the Independent Orthodox Church.

Leiningen, the king's grandson, told the Canadian Jewish Press that King Boris III had remained firm in his insistence that Bulgaria's Jews not be deported. Whether or not the church intervened to save Jews as well, “the final decisions had to be made by [the king],” he noted.

Boris III was unable to save the Jews of Thrace and Macedonia because those territories, unlike Bulgaria, were occupied by the German army, Leiningen explained.

King Boris III died in 1943 shortly after a meeting with Hitler. His body was never found.

Leiningen noted that his own father, Prince Karl, had moved to Israel in 1969 and had spent the last two decades of his life there, on a horse ranch in the Galilee. “No one could really figure out” why his father was drawn to Israel, he said.