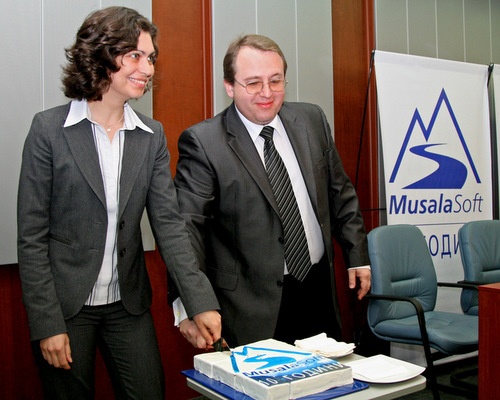 The leading Bulgarian IT company Musala Soft has registered a staggering average annual turnover growth of 72% since it was founded ten years ago.

The management of Musala Soft, which is celebrating its 10th birthday in April 2010, has announced at a news conference Thursday that it generated a turnover of BGN 8.015 M, and a net profit of almost BGN 1 M.

“Musala Soft is currently working on a number of long-term projects for multinational corporations and clients from Europe to the USA, partnering with teams from around the world,” stated Deyan Lilov, CEO of Musala Soft.

He explained that the average annual profit growth of the company over the last ten years has been 80%; the number of the companies employees – which are currently 174 – has expanded by about 40% on average each year.

“This first anniversary of ours is a good time to recapitulate on our results which make all of employees and clients happy. By exerting our efforts to do the best we can, we are sure we are headed in the right direction,” Lilov stated.

The owners of Musala Soft are graduates of the Sofia University and all but one of them have taken part in Bulgaria’s national IT teams and have won medals from international IT competitions.

The company has been involved in a number of initiatives to support high-tech education in Bulgaria by providing financial assistance to events and competitions organized by Bulgarian schools and universities. It has organized an “IT Leaders Academy” together with the Mathematics and IT Department of the Sofia University St. Kliment Ohridski, and has started to focus on research and development activities in the last few years.

Some of the new projects Musala Soft started working on in the first months of 2010 include portal solutions for the UK insurance company Aviva; a German investment forum named Aktionaersforum AG; software application for managing distraints at the DSK bank, a portal for the optimization of human resource management integrated with SAP for the Sofica Group; consultant services in the field of Tibco integration for the Bulgarian mobile operator Vivacom.

Founded on April 1, 2000, Musala Soft (Musala is the name of the highest peak on the Balkans located in the Rila Mountain in Southwest Bulgaria) was started as part of a Bulgarian-US consortium in the field of software development services. The same year the company got its first clients from the Silicon Valley in the USA.

In 2001, Musala Soft was restructured as an independent company after the dot.com crisis; the next year it got its first projects for global companies such as IBM and DHL.

In 2003, the company opened its new office in the Interpred Center in Sofia, and received certification as the first IBM Premier Business Partner for Software for Bulgaria; it also took part for the first time in international IT expos — CeBIT in Hannover, and Systems in Munich, Germany.

The following year, Musala Soft started large-scale projects with Hewlett Packard and IBM, and its annual turnover surpassed BGN 1 M. It started an international internship program. In 2005, the company started working for SAP, OMV, and M-Tel.

In 2006, it doubled the number of its software developer, and became a partner of TIBCO for Bulgaria and the Balkans; the year after the company got its first order for the Bulgarian government in the face of the National Revenue Agency.

In 2008, Musala Soft started together with the Mathematics and IT Department of the Sofia University its “IT Leaders Academy”, and got long-term contracts with the Customs Services of the Kingdom of the Netherlands and Eduardo Miroglio.

In 2009, it became the first firm in Bulgaria and the region to receive a level 3 appraisal under the CMMI (Capability Maturity Model Integration). It started joint projects together with Siemens and Vivacom, and set up a Center for Applied Research.

Musala Soft is specializing in software services for the integration of business applications, systems and analyses. It has developed methodology to execute projects under complicated setups including geographical dispersion, remote access, organizational obstructions and tight deadlines, and has worked with clients such as DHL, EnBW, HP, IBM, OMV, SAP, as well as small and medium-sized enterprises in Bulgaria, Western Europe and USA.