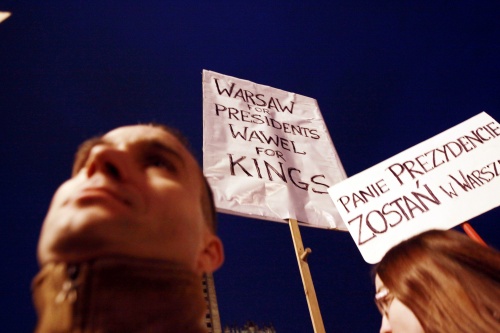 Protestors hold banners 'Warsaw for presidents, Wawel for Kings' (L) and 'Mr. President stay in Warsaw' (R) during the demonstrate against presidential funeral at the Royal Wawel Castle, in Warsaw, Poland, late 14 April 2010. Photo by EPA/BGNES

Hundreds took to the streets in Poland late on Wednesday in protest against a decision to bury late president Lech Kaczynski in a historic cathedral alongside monarchs and national icons.

The Internet-fuelled protest campaign against the burial plan has ruptured the national unity seen since Kaczynski perished in an air crash in Russia on Saturday.

Opposition was building over the plan to lay President Lech Kaczynski and his wife, Maria, to rest in Wawel Cathedral in Krakow, which also holds the remains of major historical figures like Marshal Jozef Pilsudski, the post-World War I leader of Poland, and Gen. Wladyslaw Sikorski, leader of the government-in-exile during World War II.

The famous Polish director Andrzej Wajda said the decision “could cause the deepest splits in Polish society since 1989,” in a letter published Wednesday on the Web site of the Polish daily Gazeta Wyborcza. In a front page editorial, the newspaper called the decision “hasty and emotional.”

Wednesday night more than a thousand people gathered in front of the Palace of Bishops, the seat of the Krakow curia, with proponents and opponents of the plan shouting at one another, some with megaphones. “Poland is here,” chanted Mr. Kaczynski’s supporters, waving photocopied pictures of the late president, while those opposed called back, “Wawel is for kings.”

Protests were also held in other big cities including the Baltic port of Gdansk, Poznan in the west, and Krakow, the southern city where Kaczynski is to be laid to rest on Sunday in the cathedral crypt of Wawel castle.