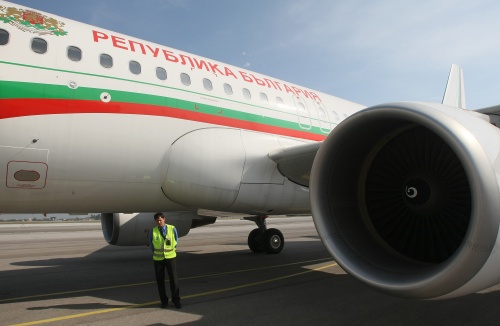 Bulgaria's government currently uses a leader Airbus as its own plane Tu-154 is banned from flying. Photo by BGNES

The Bulgarian state leaders will not be allowed to use their only plane which the same as the crashed plane of Polish President Kaczynski.

The Tu-154 plane of the Bulgarian government was actually banned from flying starting April 1, 2010, for other reasons but the crash near Smolenski in which an entire high-ranking Polish delegation perished on its way to the Katyn Massacre remembrance ceremonies has created additional concerns.

The Bulgarian Tu-154 will not fly until the causes of the crash of the Polish plane become clear, the head of the Bulgarian government’s pilot squad, Pencho Penchev, told the 24 Chasa Daily.

The Russian-made plane has been used by the Bulgarian officials for more than 20 years. A total of four such planes are used in Europe: one in Bulgaria, one in Slovakia, and two in Poland – one of them crashed near Smolensk, Russia, on Saturday.

Even though the Russian investigators concluded that no technical failure of the plane caused the crash, the Bulgarian authorities are going to reconsider the use of the Tu-154 plane. The last time the government aircraft created problems was in February 2008 when Bulgarian President Georgi Parvanov attempted to visit Mexico but had to make an emergency landing on the Azores as one of the retractable undercarriages got stuck.

The permit of the Bulgarian Tu-154 expired at the end of October 2009 but was extended by a year after technical examination in Moscow. Starting April 1, 2010, however, the Bulgarian civic aviation authorities banned the flights with the plane as the respective pilots could not the sufficient number of practice hours, Penchev explained

In February 2010, the Bulgarian Transport Ministry had announced that the aircraft would be used till June 2010, and will then be auctioned with a starting price of BGN 2,5 M.

Bulgaria’s state leaders are currently using for their formal visits a leased airbus.