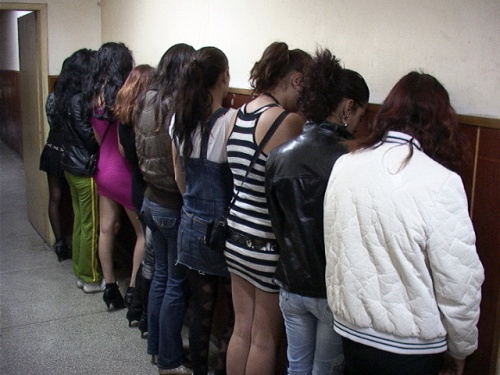 Varna policemen detained a number of prostitutes as they busted 9 pimps controlling a prostitution ring. Photo by BGNES

Two special operations in Sofia and Varna led to the arrest of two dozen gangsters in Bulgaria.

Nine persons have been arrested in the Black Sea city of Varna for organizing and controlling a prostitution ring, the District Prosecutor Vladimir Chavdarov announced.

The operation was led by the Varna Prosecutor’s Office together with the Unit for Combating Organized Crime and various other police detachments.

In addition to the nine pimps, the police arrested a number prostitutes that were controlled by them, including transsexuals.

At about the same time, the police in Sofia shattering a drug dealing group in the southern districts of Mladost and Druzhba. Nine men and women were arrested for organizing a criminal group for distribution of cocaine, amphetamines, and marijuana.

The nine detainees include the boss of the group, a 34-year-old man with initials A.M., aka “Sando the Gypsy”, as well as the street dealers, the person in charge of phone orders, the “treasurer” of the group, and the man who was responsible for the storage site.

In addition to the drug dealing, the criminal group also had a racketeering squad that helped them impose their control in the two districts.