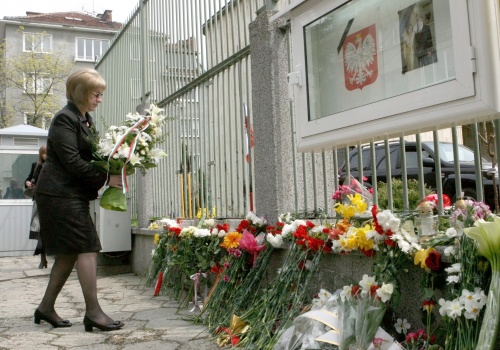 Bulgarian Parliament Chair Tsetska Tsacheva is pictured laying flowers at the Polish Embassy in Sofia on Sunday, a day after the horrific crash near Smolensk. Photo by BGNES

The captain of the Polish government plane, which crashed near Smolensk on Saturday, was likely pressured by the high-ranking delegation, said Poland’s Ambassador to Sofia, Andrzej Papierz.

“The easiest thing is to put the blame on the pilot because he was in charge but I would abstain from doing that,” His Excellency said talking to Bulgarian journalists after the service in the Catholic cathedral in Sofia honoring the memory of Polish President Lech Kaczynski and the other 95 person who died in the horrific crash on their way to the Katyn Massacre remembrance ceremonies.

“I wouldn’t want to elaborate on this topic but I have traveled with such delegations many times, and I know that there is enormous pressure piling on the pilot in such cases even if the person in charge of the flight believes landing should not be attempted,” Papierz declared commenting on why the Polish pilot attempted to land at Smolensk even though he was advised by the Russian dispatchers to land in Minsk.

Papierz pointed out that a lot of people had gathered for the remembrance of the 70th year since the Katyn Massacre, and after landing at Smolensk, the VIP Polish delegation, which was led by President Kaczynski, had to travel another 15 km to the actual spot of the ceremonies. The Belorussian capital Minsk, where the plane was advised to land, is located 150 km away from the Katyn Massacre site, and the delegation probably decided that landing there would mean a huge delay.

Ambassador Papierz said he participated in the opening of the Polish military cemetery near Katyn 10 years ago, and knows the fatal airport at Smolensk where Kaczynski’s plane attempted to land.

“This is one of the many military airports, in the woods, I don’t see any fault on part of the Russians here. These are very narrow, surrounded by forests, there was a very thick fog, and this is what caused this tragedy,” Poland’s Ambassador in Sofia suggested as cited by BTA.

He said that authorities would probably be more careful in sending such large VIP delegations on one plane. In his words, the Bulgarian President travels the same way with his delegations when he visits foreign countries.

“We are not so rich as to have Air Force 1 planes, and to transport everyone individually. This is our reality. There has been much talk of buying new planes but the society is very sensitive towards such purchases; such decisions are viewed very negatively by the people, I think the situation in Bulgaria is similar. People see them as a kind of privilege, and as a result our government had two Tu-154 airplanes, and one of them crashed,” Papierz concluded.

He did stress that the specially appointed commission would have to investigate and find out what exactly happened with the plane.

“There are many personal tragedies here. The President’s mother was brought home from the hospital yesterday, she is in a very serious condition. She probably has not even been told that her son perished,” said the Polish Ambassador.

The one-week mourning in Poland for the casualties of the horrific crash started on Sunday.