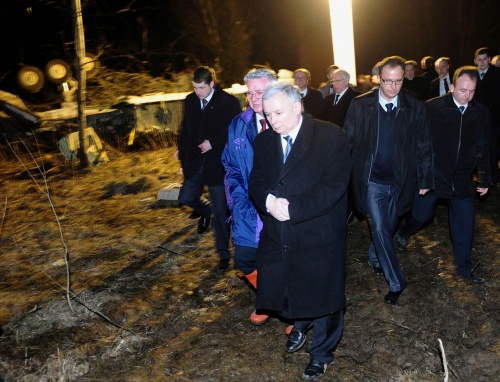 Poland’s former Prime Minister Jaroslaw Kaczynski has identified the bodies of his brother, President Lech Kaczynski, and his sister-in-law, Maria.

Jaroslaw Kaczynski arrived in Smolensk, Russia, Saturday night, hours after the plane crash in which perished Lech Kaczynski and 96 other members of a high profile Polish delegation on route to a Katyn Massacre remembrance perished.

Poland’s Acting President, the Marshall of the Sejm, Bronislaw Komorowski, has declared seven-day mourning after the tragedy that shocked Europe and the world. After identifying the bodies, Jaroslaw Kaczynski has returned to Poland.

The Polish government is holding an emergency meeting Sunday in order to prepare a mechanism for starting consultations with the political parties for the holding of new Presidential Elections.

Polish Prime Minister Donald Tusk has canceled his trip to Canada and the US, where he was supposed to participate on Monday in Washington in an international nuclear non-proliferation summit.