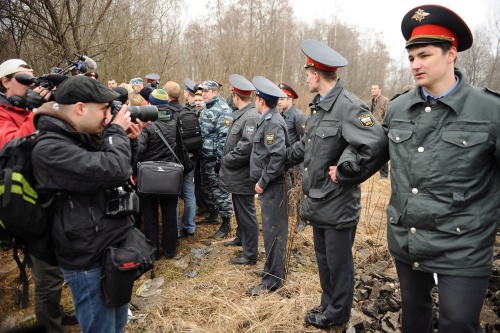 Russian special services secure the area after a Polish government plane crashed near the airport in Smolensk, killing the country’s President, many political elite and the army top commanders. Photo by BGNES

The passengers list from Poland’s government plane which went down near Smolenks Saturday, killing all aboard, show that top commanders of the country’s armed forces are among the dead.

In addition to President Lech Kaczynski, First Lady, Maria Kaczynska, and many of the country’s top politicians and clergy, the list shows the names of WP Gen. Franciszek G?gor – Head of the General Staff of the Polish Army, and Maj. Gen. Bronislaw Kwiatkowski, the Commander of Poland’s Operational Forces.

The leadership of the Polish army is holding an emergency meeting Saturday to decide on measures to react to the crisis situation.

According to Polish military rules, the first deputies are to act as Commanders until the army makes a final decision.

For Poland, a member of NATO, the tragedy means a true change of generations in the country’s armed forces.