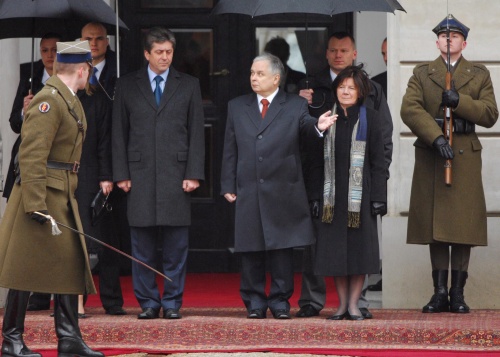 Bulgarian President Georgi Parvanov (left) together with his Polish counterpart Lech Kaczynski on April 8, 2008. Parvanov made a two-day state visit to Poland at Kaczynski's invitation. Photo by BGNES

Poland’s President Lech Kaczynski, who perished Saturday in a plane crash near Smolensk, had one official meeting with the Bulgarian head of state.

During their meeting, Poland's President Kaczynski pointed out his country's relations with Bulgaria should be closer than they are, and that Bulgaria and Poland are not among the richest countries in the EU because of their turbulent and unfavorable history, especially during the communist era.

Back then, Parvanov and Kaczynski expressed their hopes for a boost of the Bulgaria-Poland trade so that it would reach EUR 1 B in 2009 – hopes that failed to materialize as the global economic crisis kicked in.

The other acting Bulgarian statesman that Lech Kaczynski came in contact after he was elected the President of Poland in 2005 is the Bulgarian Prime Minister Boyko Borisov.

Borisov was among the European politicians who were invited to Gdansk, Poland, on September 1, 2009, to participate in the remembrance of the start of World War II. The events were hosted by Polish President Lech Kaczynski and Prime Minister Donald Tusk, who was actually the rival that Kaczynski defeated in Poland’s 2005 Presidential Elections.