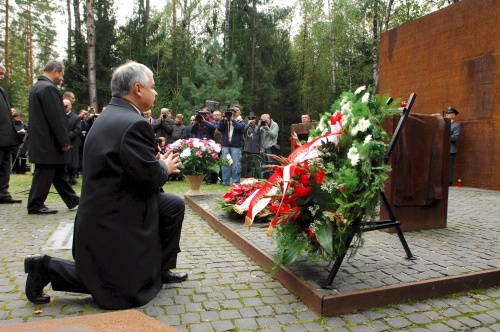 The plane that crashed carrying Polish President Lech Kaczynski and 86 others near Smolensk was taking the passengers to mark the Katyn massacre near the town.

Kaczynski was due to visit Smolensk to mark the 70th anniversary of the Katyn massacre, when Soviet troops killed thousands of Poles.

The Katyn massacre, also known as the Katyn Forest massacre (Polish: zbrodnia katy?ska, 'Katy? crime'), was a mass murder of thousands of Polish prisoners of war (primarily military officers), intellectuals, policemen, and other public servants by the Soviet NKVD, based on a proposal from Lavrentiy Beria to execute all members of the Polish Officer Corps. Dated March 5, 1940, this official document was then approved (signed) by the entire Soviet Politburo including Joseph Stalin and Beria.

The number of victims is estimated at about 22,000, the most commonly cited number being 21 768. The victims were murdered in the Katyn Forest in Russia, the Kalinin and Kharkov prisons and elsewhere. About 8,000 were officers taken prisoner during the 1939 Soviet invasion of Poland, the rest being Poles arrested for allegedly being "intelligence agents, gendarmes, saboteurs, landowners, factory owners, lawyers, priests, and officials."

Nazi Germany announced the discovery of mass graves in the Katyn Forest in 1943. The revelation led to the end of diplomatic relations between Moscow and the London-based Polish government-in-exile.