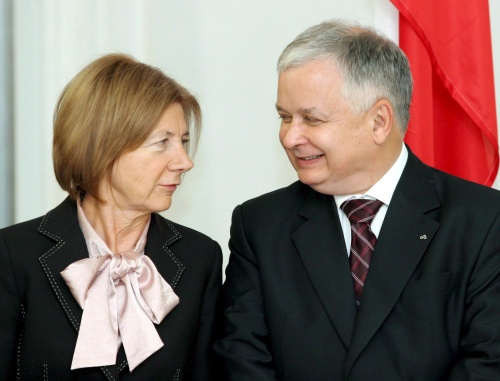 A file picture dated October 24, 2005 shows Polish President Lech Kaczynski (R) and his wife Maria during a ceremony at which the official results of the presidential elections were announced in Warsaw. Photo by BGNES

Below is a list of the high ranking Polish officials who were aboard the plane carrying the Polish delegation to the remembrance of the Katyn Massacre led by President Lech Kaczynski, which crashed near Smolensk in Russia.

According to preliminary information, all 87 persons on board of the Polish government plane died.

Ryszard Kaczorowski - Ryszard Kaczorowski, Honorary GCMG (born 26 November 1919) is a Polish Statesman. Between 1989 and 1990 he served as the last President of Poland in exile. Resigned his post following Poland's regaining independence from the Soviet sphere of influence and election of Lech Wa??sa as the first democratically-elected president of Poland since World War II. He also passed the presidential insignia to Wa??sa, thus ending the 45-years long episode of the Polish government in exile.

Jerzy Szmajdzi?ski - a Vice-Marshal of Polish Sejm and a former Polish minister of defence. Candidate for President of Poland in presidential elections 2010

Pawe? Wypych - Secretary of State in the Chancellery of the President of Poland.

WP gen. Franciszek G?gor – Head of the General Staff of the Polish Army

Andrzej Przewo?nik - Vice-President and Secretary of the Commission for the Commemorations of the Victims of Katyn Massacre of the Prime Minister (1994-1998).

Przemys?aw Gosiewski – Member of the Sejm

Zbigniew Wassermann – Member of the Sejm

Janusz Kurtyka – President of the Polish Institute of National Remembrance

Bishop Tadeusz P?oski - Polish Roman Catholic priest, dean of the riverside military units of the Ministry of Internal Affairs and Administration, Dean of the Government Protection Bureau, Field Bishop of the Polish Army